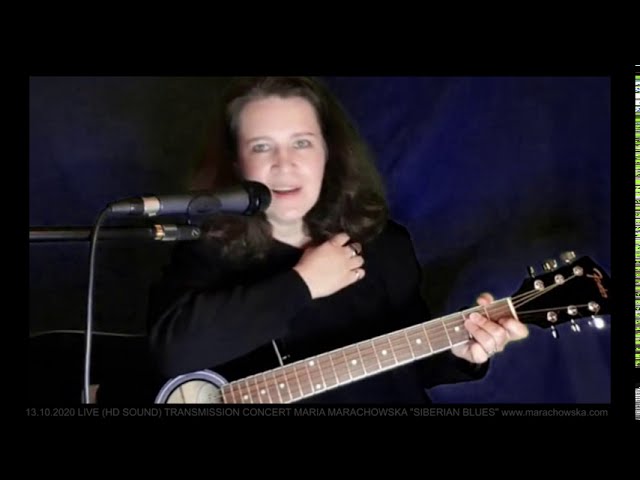 Maria Marachowska, born on July 21st, 1980 in Omsk/ Siberia (Russia), spent her early childhood in Estergom/ Hungary and in 1986 she moved with her family to the historic metropolis Kaliningrad/Königsberg, where she attended the E.T.A. Hoffmann music school for highly gifted children/ instrument: piano/1989-1993. In 1998, she returned to her native city Omsk/ Siberia for a period of 2 years to complete her studies of fine arts. Since 2000 she has been living in Germany, since 2004 in Berlin, where she has also newly discovered music for herself in addition to her work as a fine artist and has created her personal, innovative music style of SIBERIAN BLUES. Although a convinced solo artist, she has also collaborated and performed with renowed musicians in the course of her professional career, i.a. with German music producer, film composer and bassist Micki Meuser who has recorded and mixed her solo albums “Emotions” (2015) and “Stranger” (2016) and from 2016 – 2017 she recorded several of her songs for digital release with British music producer, film composer and exceptional Hammond player Alan Reeves. In 2017 she released her third solo album “Melancholy”. Driven by an untiring creative energy, she constantly continues to develop and share her new musical work on various music and social media platforms both as carefully edited sound recordings and live transmissions and in the form of artistic music videos created by herself. Since 2017 she is a member of GEMA and has submitted more than 200 songs and 300 instrumental compositions.
With her “Siberian Blues”, Maria Marachowska has created an entirely new music style. Its strength lies precisely in the deliberate slowness that leaves room to the tones and allows them to linger on in the silent pauses. In her music and the soft timbre of her deep singing voice, this blue haze, that is Blues, takes on the shape of figures and moods, forms poetic words either from her own pen orinspired by world literature, and seems almost meditative. Whoever gets into this unique experience of “Siberian Blues”, submerges far under the surface and comes across long lost feelings and emotions. This particular energy is transferred to the listener and has a cathartic effect.
She is fully aware of the fact, that she has the charism of a solo artist, she convinces with her personality and proves in a time, tending towards musical group pressure, that it is something special and outstanding to celebrate this art of minimalism and set a clear, precise and courageous statement against this band consonance. In her own hands, the diamond is polished best and reaches the utmost brilliance.
The melody speaks, we believe to hear a continuous echo to her singing voice on her guitar, she is capable of a playing technique that in a wondrous way conveys the acoustic illusion of hearing several instruments out of one. In the general effect, there is no need of any other instrument but this single guitar, to produce the drive of a band. It is as if the tones were falling from a distant star, as William S. Burroughs described the divine power of music in his “Cities of the Red Night“. Text: Iris Weirich