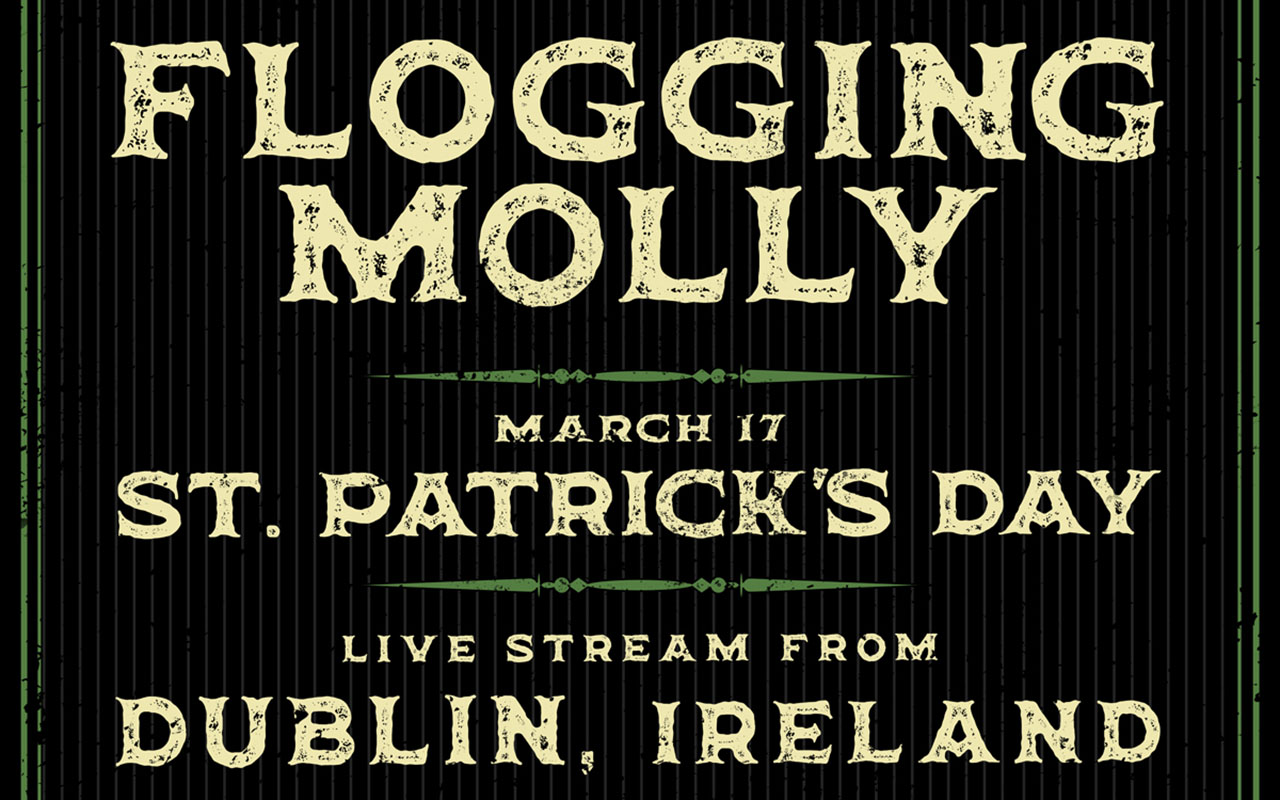 Flogging Molly has announced their upcoming St. Patrick’s Day livestream performance set to take place at Whelan’s Irish Pub in Dublin, Ireland. The Wednesday, March 17 show is being sponsored by Bushmills Irish Whiskey®, the world’s oldest licensed whiskey distillery. Early bird tickets for the livestream are available now via FloggingMollyLive.com and will run through Friday, March 12 at midnight EST. Various exclusive streaming bundles include a t-shirt, limited edition poster, Lucky Bag, virtual meet & greet with the band, and access to a stripped-down acoustic set of fan favorites and Irish traditional songs. The show begins at 12 pm PT, 3 pm ET, and 7 pm Ireland/GMT time, and from there, purchasers will have full access to stream the entire show whenever they like through midnight ET on Sunday, March 21. Concert Crap is partnering with Danny Wimmer Presents on a Live Stream giveaway.  Click Here to be taken to Concert Crap’s TikTok page for further details on how to enter.

Flogging Molly’s Dave King and Bridget Regan have been in Wexford, Ireland since lockdown was declared nearly one year ago, while the rest of the band have been in their homes across the U.S. And while there is nothing easy about crossing international borders for a full production live show at this moment in history – quarantine policies are ever-changing as the global response continues to evolve – it’s this reality that we all share, which is exactly why the band felt it needed to happen this St. Patrick’s Day. With the safety of the band, touring and film crew, and everyone on hand as top priority, the next priority was a good time – and a loud, raucous, and joyous celebration of all that we – the band and fans – have to be thankful for.

Says Dave King: “In any house, even in the darkest of times, there’s always a room, a room for celebration. In over twenty years together, this is our first ever show from the Emerald Isle on St. Patrick’s Day. Welcome to Ireland. Let’s celebrate! From our family to yours, Sláinte!

In the lead up to the event, Bushmills® is offering fans the opportunity to partake in their “First Whiskey” program. As a friendly Irish gesture ahead of St. Patrick’s Day, whiskey lovers 21+ across the U.S. can safely order a Bushmills Irish Whiskey® to-go from their neighborhood pub and the beloved Irish whiskey will cover the cost, through Thursday, March 18. Terms and conditions apply, learn more details on the Bushmills® “First Whiskey” Rebate Program HERE.

Tickets will start at $15 per household, with unlimited streams available across 5 days (March 17-21).  The live airing, pre-show and after-show acoustic performance will be directed by Dublin-based director Richie Smyth (Irish director of multiple U2 videos, feature films, Guinness commercial spots and more), and Flogging Molly have partnered with global event promoter Danny Wimmer Presents for the production. A portion of the band’s proceeds from ticket sales will go directly to a favorite charity of theirs, Sweet Relief’s COVID-19 Crew Fund, which supports road crew members grounded and out of work during the global pandemic.

Who has seen Flogging Molly perform live? Comment below.