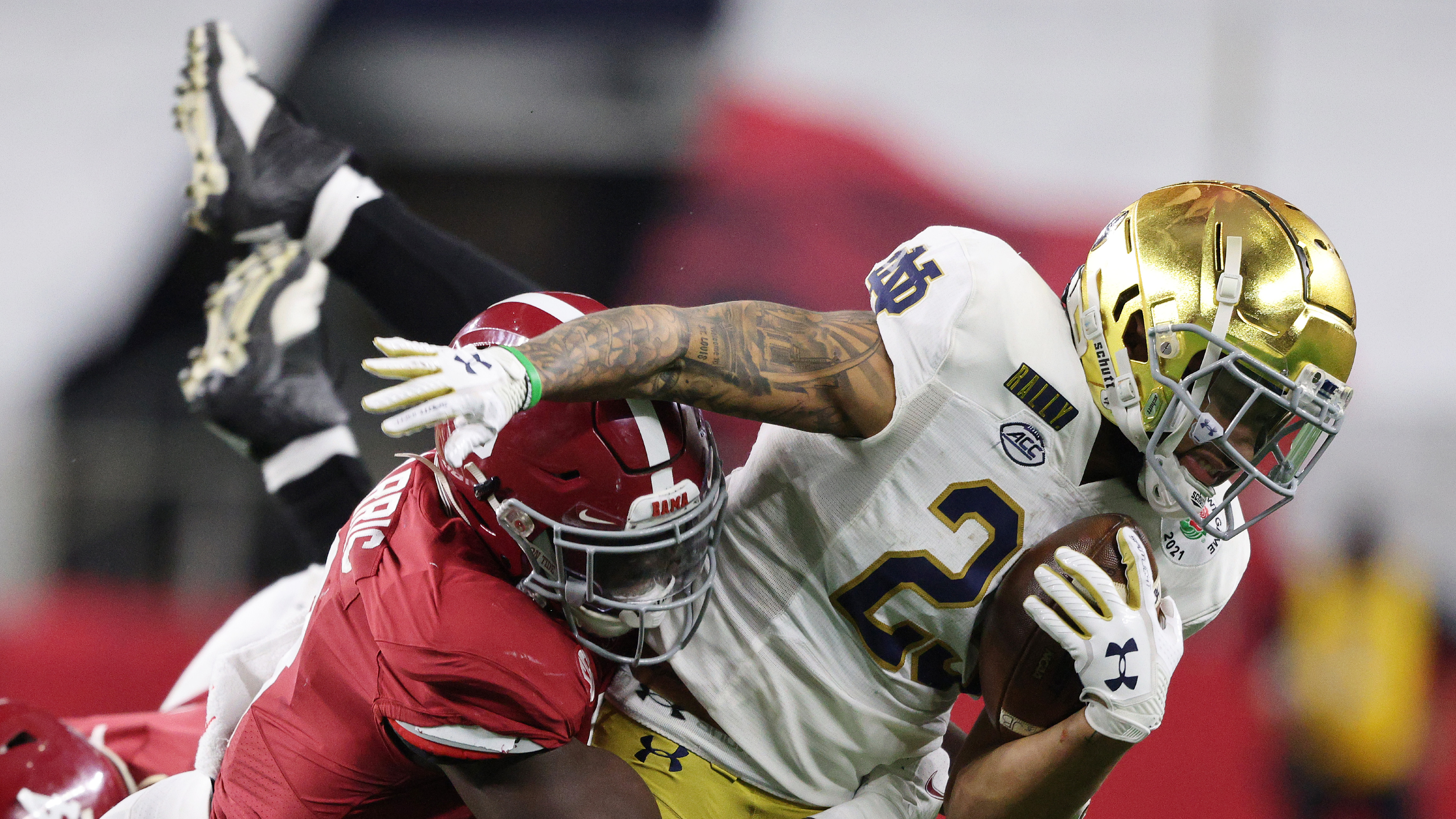 Bowl season faced more challenges than ever in 2020.

Eighteen college football bowl games were canceled because of the ongoing COVID-19 pandemic in the United States. That said, the 2020-21 postseason still produced some entertaining games, and the conclusion will feature No. 1 Alabama vs. No. 3 Ohio State in the College Football Playoff national championship game on Jan. 11.

No matter how you feel about bowl games, there are always memorable games and performances, for better or worse.

Here’s, a look at the conference records with just the national championship game remaining:

With that, Sporting News looks at the winners and losers from the reduced 26-game slate.

The Ohio State quarterback turned in an unforgettable performance in his team’s 49-28 victory over No. 2 Clemson in the CFP semifinal at the Sugar Bowl. Fields had six touchdown passes and six incompletions to finish with 385 passing yards. Four of those touchdown passes came while playing through an undisclosed injury, the product of a targeting hit by Clemson linebacker James Skalski. The Buckeyes avenged last year’s Playoff semifinal loss to the Tigers at the Fiesta Bowl. Now Ohio State has a chance to win a second CFP championship.

Trevor Lawrence threw for 400 yards, but that wasn’t enough in the Tigers’ second consecutive loss on the Playoff stage. Swinney gave the Buckeyes bulletin board material by putting them at No. 11 in his final Coaches Poll vote. Ohio State responded by finishing with 639 total yards — 11 more than LSU put up in its 42-25 CFP championship victory over Clemson last year. That should provide offseason motivation for Clemson as it readies for the next go-round.

Alabama’s Heisman finalists put on a show in the 31-14 victory against Notre Dame at the Rose Bowl. Jones finished with 25-of-30 passing, 297 yards and four touchdowns. Three of those went to Smith, who had seven receptions for 130 yards. Offensive coordinator Steve Sarkisian, who was named Texas’ new coach on Saturday, dialed up a masterful game plan that helped to put the Crimson Tide in position to win a sixth national championship under Nick Saban.

The Gators’ top four receiving targets opted out of the Cotton Bowl Classic, and then Heisman finalist Kyle Trask threw three first-half interceptions in a 55-20 blowout loss to Oklahoma. Trask might have been better off sitting out, too. Florida coach Dan Mullen said the team could have opted out of the bowl game because of a depleted roster, and then he doubled down by saying, “The last game the 2020 team played was 11 days ago (in the SEC championship).” That attitude calls the value of New Year’s Day 6 bowls further into question.

The conference finished 5-0 in bowl games, and the Sooners used their Cotton Bowl experience as a springboard to 2021. Their offense should be fantastic next season with Spencer Rattler, Marcus Major, Seth McGowan and Marvin Mims. Lincoln Riley finally beat an SEC team in a bowl game. And Oklahoma wasn’t the only winner. Texas beat Colorado 55-23 before unexpectedly firing Tom Herman and hiring Sarkisian. West Virginia and Oklahoma State also won. Iowa State capped off the perfect bowl season with a 34-17 victory over Oregon in the Fiesta Bowl. It was quite the turn of events after a disappointing string of September nonconference losses. The Sooners, Longhorns and Cyclones could be all top-10 teams heading into the 2021 season.

Clemson and first-time member Notre Dame lost in the semifinals, which put a damper on an otherwise historic season for the conference. Miami lost 37-34 to Oklahoma State in the Cheez-It Bowl, a loss that was compounded by quarterback D’Eriq King tearing his ACL. North Carolina lost to Texas A&M 41-27 in the Orange Bowl, Wake Forest lost to Wisconsin 42-28 in the Duke’s Mayo Bowl, and N.C. State was edged by Kentucky 23-21 in the Gator Bowl. That’s an 0-6 mark, tied for worst among the conferences.

Coastal Carolina’s undefeated bid fell short after losing 37-34 to Liberty in a Cure Bowl thriller, but the conference still built on a strong season in its bowl games. Appalachian State and Louisiana could finish as ranked teams after their respective bowl victories against North Texas and UTSA. The Mountaineers got one of the best individual bowl performances from running back Camerun Peoples, who rushed for 317 yards and five touchdowns against the Mean Green in the Myrtle Beach Bowl. Georgia State and Georgia Southern also won. The conference’s four victories were by an average margin of 22 points.

The conference finished 0-6 in bowl games, the lowest mark among the Group of 5 leagues. Conference champion UAB didn’t get to play; its Gasparilla Bowl appearance was canceled because of COVID-19 issues at 2-8 South Carolina. Marshall and UTSA each lost by a touchdown; those were the smallest of C-USA’s six bowl defeats.