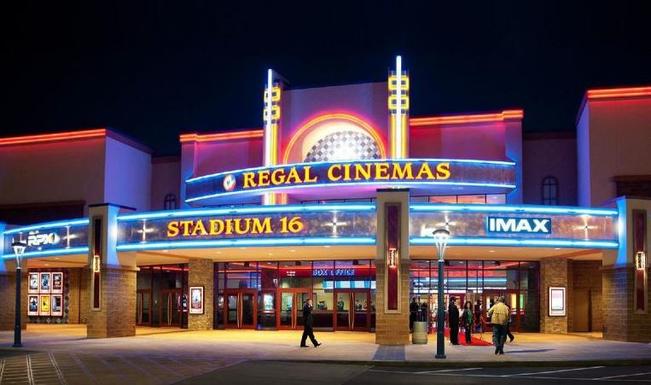 Exhibition shares headed south Monday amidst a broader market rally as continued delays in big studio releases pushed a major circuit to close its doors, again, and raised a new round of jitters over the long term health of the sector.

Regal parent, U.K. chain Cineworld, which is traded in London, saw its share plunge by 50% (it was down 33% at latest check). Stateside, AMC Entertainment, the world’s largest exhibitor, had dropped 10% in late morning trade; Cinemark nearly 14%; Marcus almost 8% and in-theater ad agency National CineMedia more than 9%.  Imax, with a boost from its strong operations China, was steadier but still down about 2.5%.

The drop stood out starkly against an upbeat market. The Dow Jones Industrial Average is up 337 points, or 1.22%. The Nasdaq and S&P 500 are rising on renewed hopes for a stimulus package, and on the possibility that COVID-positive President Trump may be released from the hospital as early as this afternoon, as his staff have suggested.

MGM on Friday announced to push the next James Bond movie No Time To Die out of November and into Easter 2021. Theaters have repeatedly warned that high-profile product was key to drawing an audience during COVID and were looking to Bond as an inflection point. Cineworld CEO Mooky Greidinger bluntly laid blame as well on  New York Governor Andrew Cuomo’s seemingly intractable — and for the industry inexplicable — resistance to opening movie theaters in the state even as other venues and businesses resume operations.

Cinemark has said it has funds to see it through a prolonged shutdown. AMC Entertainment has cash to see it into next year — or for about six months, according to S&P which trimmed the company’s credit rating Friday. It’s expensive run theaters — particularly in the COVID era -and the cost benefit analysis becomes increasingly unclear with major markets shut and new releases scarce.

Imax, which listed on the U.S. and Hong Hong exchanges, announced this morning “a record-breaking” $13 million opening weekend of the National Day Golden Week holiday in China, a historically strong box office period that runs from October 1 to 8 this year. It said the figure marks Imax’s best-ever opening weekend for the National Holiday, up 25% over last year despite a 75% capacity limitation across the country.

The exhibition carnage follows a plea for industry relief aid by NATO (National Associations of Theater Owners), which was joined by the Directors Guild of America and the Motion Picture Association and other Hollywood players in a letter to Congress. The letter warned that nearly 70% of small to mid-sized theater chains will either close permanently or go bankrupt if losses continued and begged for “a bridge” to get to 2021 and a vaccine.

New York’s policy on movie theaters has been incredibly disheartening for the industry. State reps have assured exhibitors several times that the industry would be next to open and they’ve stood even as bowling allies, gyms, museums and indoor dining got the greenlight. Theaters are following a set of strict health and safety protocols, including state recommended air filters, and following all guidelines and industry players note that not a single case of COVID has been traced to a movie theater. They are open in most U.S. states and around the world.

Theaters are also closed in Los Angeles, which is also a major blow when paired with New York, taking two major movie markets out of commission. However, theaters are open elsewhere in California according to infection parameters laid out by the state — something that New York hasn’t set out, leaving exhibition in the dark.

Muddying the picture even more, Governor Cuomo is currently dealing with an outbreak of COVID hotspots in areas of Brooklyn Queens (and outside NYC in Rockland County). New York City Mayor Bill De Blasio Sunday ordered schools and other non-essential businesses in affected areas in the city to shut down again pending approval by the state. The governor is expected to weigh in on that expected today.