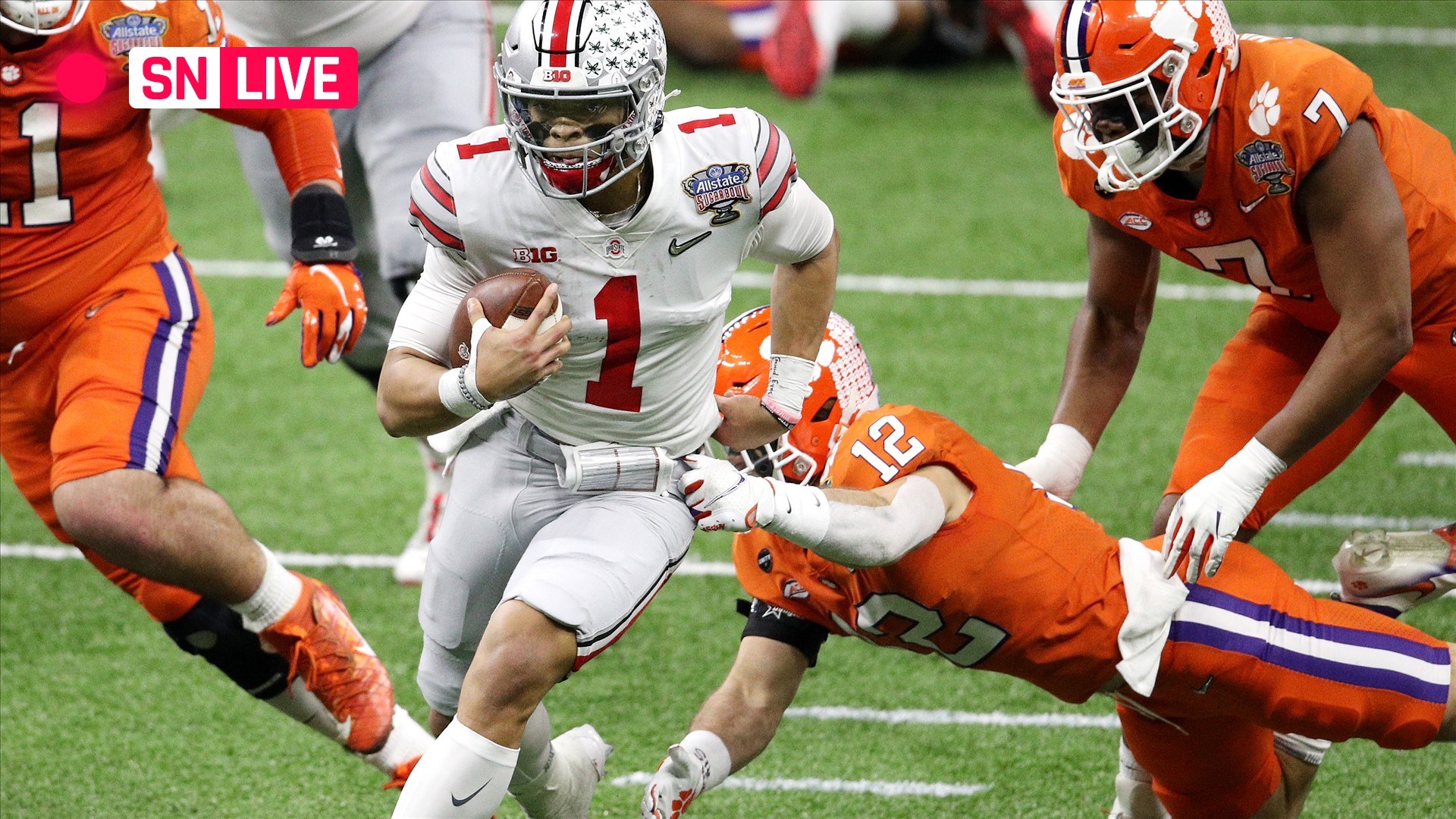 The projected top two selections in the 2021 NFL Draft will square off in the College Football Playoff semifinals Friday at the Sugar Bowl.

Clemson quarterback Trevor Lawrence is a near lock to go No. 1, while Ohio State quarterback Justin Fields could be scooped up with the second overall pick.

Given the abilities of Lawrence and Fields, it’s little surprise their teams have advanced to this postseason stage. Clemson (10-1) has been dominant since a midseason defeat against Notre Dame. Ohio State (6-0) did enough in its shortened Big Ten season to convince the CFP committee to extend an invite — though Tigers coach Dabo Swinney didn’t think the Buckeyes should have been ranked in the top 10, let alone the top four.

The winner of Clemson vs. Ohio State will face Alabama in the championship.

Sporting News is tracking live scoring updates and highlights from Clemson vs. Ohio State in the College Football Playoff semifinals. Follow for complete results from the 2021 Sugar Bowl.

11:05 p.m.: Etienne gets a third-down pitch from Lawrence on a speed option, but he’s hit in the backfield.

11:02 p.m.: Quick three-and-out for Ohio State after the turnover. Clemson gets the ball right back, albeit with worse field position.

10:56 p.m.: Fumble. Lawrence loses the ball and Ohio State falls on it. A video review upholds the fumble call. It was a weird play, though, as Lawrence didn’t appear to attempt a recovery.

10:41 p.m.: Sermon picks up an important first down to slow Clemson’s momentum. A three-and-out would have been costly there.

10:32 p.m.: TOUCHDOWN, Clemson. Powell has been Lawrence’s favorite target tonight, so it’s no surprise to see him on the scoreboard with a 10-yard catch. 35-21, Buckeyes.

Defense gets a turnover, offense goes 80 yards for a TD!

Trevor Lawrence to Cornell Powell for the 10-yd TD. Cornell with 2 big catches on that drive.#ALLIN || Watch on ESPN pic.twitter.com/RwWhuJcGW1

10:32 p.m.: Powell runs a crisp deep out route and is rewarded with a pinpoint pass from Lawrence. Clemson is in the red zone.

10:24 p.m.: Interception. Fields tries to throw through pressure, but the ball is tipped and picked off. Clemson really needed that.

10:21 p.m.: Fields hits another deep ball! He’s putting on a show. Olave is inside the Clemson 20 with that catch.

9:41 p.m.: Ohio State’s defense has been great in the second quarter. It forces another punt with 3:20 remaining in the half.

9:34 p.m.: TOUCHDOWN, Ohio State. Fields still doesn’t look like he’s recovered from the hit he took, but he manages to re-enter the contest and find Olave in the end zone. 28-14, Buckeyes.

9:32 p.m.: Targeting is called for the hit on Fields. James Skalski has been ejected. Automatic first down for Ohio State.

9:29 p.m.: Fields takes a hard hit to the ribs as he tries to pick up a first down on the ground. He didn’t reach the marker, either, going down two yards short.

9:24 p.m.: Sermon steamrolls through the Clemson secondary, leaving at least three defenders on the ground with his powerful frame. Those 30 rushing yards bring him to 93 for the contest.

9:20 p.m.: Etienne returns for third-and-4. He’s targeted by Lawrence, but the pass is off the target. Clemson punts again.

9:19 p.m.: Etienne starts this Clemson drive on the sideline. Might have been hurt on the kickoff.

8:49 p.m.: The screen game is working wonders for Clemson. Etienne has three catches for 53 yards in the first quarter.

8:43 p.m.: TOUCHDOWN, Ohio State. Trey Sermon delivers consecutive explosive plays — one through the air and one on the ground — to tie the game. 7-7.

8:43 p.m.: The Buckeyes move the chains for the first time with a completion from Fields to Chris Olave.

8:38 p.m.: Lawrence had tight end Davis Allen open behind the Ohio State secondary, but pressure in his face prevents what would have been a long completion. Clemson punts the ball back.

8:35 p.m.: Fields tries to run up the middle on third-and-2 but is met behind the line of scrimmage. Ohio State will punt.

8:25 p.m.: TOUCHDOWN, Clemson. Lawrence sprints to the edge and dives into the end zone. He set career-high in rushing against Ohio State last year. 7-0, Tigers.

8:24 p.m.: What a catch from Cornell Powell! He sets up first-and-goal for Clemson with a jump ball snag.

8:21 p.m.: Clemson picks up a quick first down from back-to-back quick hitters. Travis Etienne then passes midfield with a catch and run.

The Clemson vs. Ohio State game will begin at 8 p.m. ET. It is one of four games that will take place on the ABC family of networks that day, including the third on ESPN..