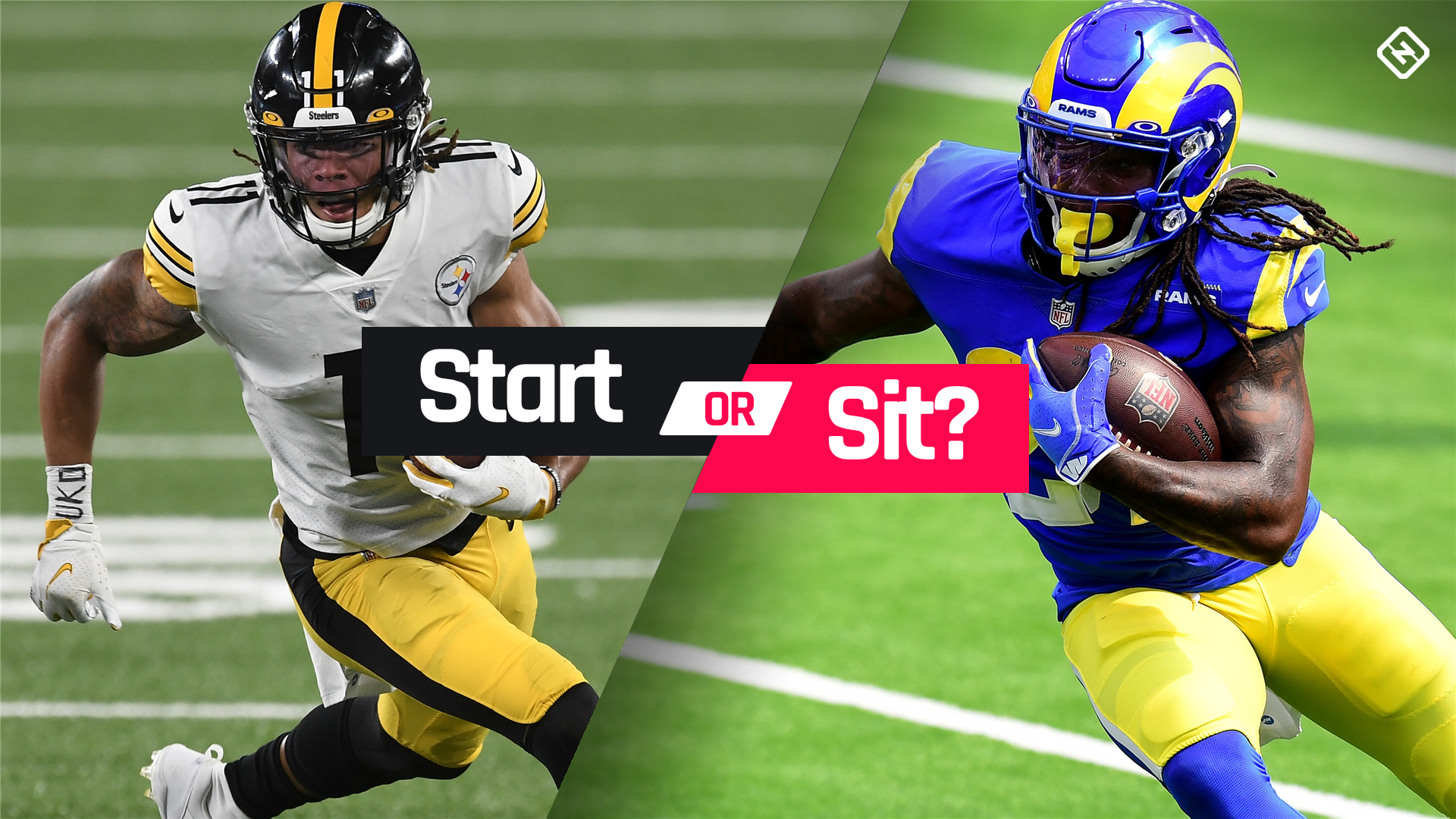 Nobody said fantasy football would be easy this season. We’re used to dealing with injuries, frustratingly inconsistent usage, and bye weeks, but the addition of sudden postponements and schedule changes is a new wrinkle that’s testing even the most veteran fantasy owners. If you’re in need of lineup advice on those tough Week 6 start ’em, sit ’em calls — and, let’s face it, who isn’t? – you’ve come to the right place. As an added bonus, we also threw in some DFS picks because we could all use a little something extra right now.

Before diving into the recommendations, keep in mind that this is a big bye week. The Seahawks, Saints, Raiders and Chargers being off has a big effect on every position, as Russell Wilson, Drew Brees, Alvin Kamara, Josh Jacobs, DK Metcalf, Tyler Lockett, Hunter Henry, Darren Waller, among others, will be out of action. The good news is there are plenty of worthwhile fill-ins who could help your teams if you just know which matchups to target.

Ben Roethlisberger, Steelers (vs. CLE). He’s getting it done every week with ever-expanding weapons, and the Browns do not have any answers on the backend.

Tom Brady, Buccaneers (vs. GB). Brady will be up for the duel with Aaron Rodgers against a weak Packers’ pass defense and should get Chris Godwin (hamstring) back for a big boost this week.

Jared Goff, Rams (at SF). Goff dropped plenty on Washington despite limited volume, and the 49ers’ depleted secondary should allow him to have Fitzmagic-like success in prime time.

Gardner Minshew, Jaguars (vs. DET). Minshew should find success tossing the rock even if DJ Chark (ankle) has to miss more time because the Lions can stink against the rest of his receivers.

Ryan Tannehill, Titans (vs. HOU). The Titans should run effectively on the Texans and set up strong play-action shots against their weak secondary.

Andy Dalton, Cowboys (vs. ARI). The Red Rifle comes out firing to keep up with Kyler Murray, and there will be no Chandler Jones to get in his face.

Kirk Cousins, Vikings (at ATL, $6,100 on DraftKings). Captain Kirk has put together many star dates with his wideouts, and now the tight ends and backs are helping him put up digits to compensate for a weak defense. The Falcons can be ripped apart all over the field.

Matthew Stafford, Lions (at JAX, $6,200 on DraftKings). Stafford returns from a bye to pick apart a Jaguars’ defense that keeps losing key bodies on every level and wasn’t that good to start the season.

Matt Ryan, Falcons (at MIN). Look, on paper, it’s another fine matchup, but there’s a good chance Julio Jones (hamstring) misses another game and it’s still on the road against a Mike Zimmer-schemed defense.

Cam Newton, Patriots (vs. DEN). We want to presume he’ll return to start but it’s not a certainty. This seems like a low-volume game for him running and passing in a defense-based walkover for New England.

Teddy Bridgewater, Panthers (vs. CHI). The Bears are much more vulnerable against the run than pass, and their blitzing can get to him a bit.

Carson Wentz, Eagles (at BAL). He grinded to a decent game in Pittsburgh, but it was still ugly and he could still do a lot better.

Baker Mayfield, Browns (at PIT). He’s got battered ribs facing the Steelers defense, so no.

Daniel Jones, Giants (vs. WAS), Nick Foles, Bears (at CAR)

David Montgomery, Bears (at CAR). Monty is getting all the backfield touches with scoring and receiving chances, and the Panthers got ripped by the Falcons on the ground last week.

David Johnson, Texans (at TEN). You want some more scoring and receiving,and there’s a chance it comes this week in a sneaky hot Nashville shootout.

Ronald Jones, Buccaneers (vs. GB). Keep flowing with RoJo even if Leonard Fournette returns because he’ll remain integral to the Bucs winning this one.

Kenyan Drake and Chase Edmonds, Cardinals (at DAL). Drake has been disappointing as Edmonds has seen his role surge. Both can provide strong flex nights against the Cowboys.

Myles Gaskin, Dolphins (vs. NYJ). He finally scored last week and the Jets’ defense is wilting.

Devin Singletary, Bills (vs. KC). Zack Moss is a bit of a concern to limit his touches, but the matchup is too good and he should get the passing-game work.

Damien Harris, Patriots (vs. DEN). They should feed the second-year back often with no Sony Michel (quad) and uncertainty at QB.

D’Andre Swift, Lions (at JAX, $4,500 on DraftKings). Is this the week coming out of a bye where the Lions actually feed Swift the ball like the talented feature back he’s supposed to be? With Matt Patricia and Darrell Bevell under fire, we say yes. The price is certainly nice to try in tournament formats.

Devonta Freeman, Giants (vs. WAS, $4,900 on DraftKings). At some point we figured New York would stop a committee approach and use his well-rounded skills as its best replacement for Saquon Barkley. Washington’s defense has proved to be overrated in a hurry.

Melvin Gordon, Broncos (at NE). Quick, what is the one thing Denver’s offense does really well that New England will focus on taking away? Boom. Same comment, different week.

Antonio Gibson, Washington (at NYG). The Giants were leaky against Zeke, but they have been generally good against the run and Gibson has to now worry about J.D. McKissic stealing touches.

Mark Ingram, JK Dobbins and Gus Edwards, Ravens (at PHI). If only we had a three-sided coin to flip to know how Greg Roman would randomly divvy up his backfield touches in this tough matchup.

Jerick McKinnon, 49ers (vs. LAR). The host-ert with the Mostert is back, and Jerick is no longer a sneaky trick.

Darrell Henderson and Cam Akers, Rams (at SF). The 49ers are still tough enough against the run to make this split hard to trust.

Will Fuller, Texans (at TEN). This offense seems fun again with Deshaun Watson.

Michael Gallup, Cowboys (vs. ARI). His chemistry right away for big plays with Andy Dalton was encouraging, and even with Patrick Peterson the Cardinals can be roasted outside.

Justin Jefferson, Vikings (vs. ATL). He came up short last week but should rebound against this atrocious secondary at home.

Tyler Boyd, Bengals (at IND). The Ravens were tough on him again, but he should bounce back in a slot spot Jarvis Landry handled well.

Diontae Johnson and Chase Claypool, Steelers (vs. CLE). Johnson left the Eagles game with a back injury, opening the door for the rookie Claypool to explode. The Browns cannot cover Johnson, Claypool or JuJu Smith-Schuster. Don’t chase Claypool’s big game, but he can still be solid here as Pittsburgh does major damage.

Mecole Hardman, Chiefs (at Bills). He will be busier with no Sammy Watkins (hamstring) in a revenge game, and the second-year speedster will make several big plays here.

John Brown, Bills (vs. Chiefs). The Chiefs struggled with giving up big plays to the Raiders and he should “Smoke” them multiple times in a shootout.

Laviska Shenault Jr., Jaguars (vs. DET, $5,200 on DraftKings). Shenault has been more involved as a big playmaker, and his value would certainly be even more appealing should DJ Chark (ankle) miss this great matchup.

Preston Williams, Dolphins (vs. NYJ, $4,700 on DraftKings). Williams busted out in a big way in San Francisco and steps into another brilliant matchup at home against weak cornerbacks.

Darius Slayton, Giants (vs. WAS, $5,400 on DraftKings). He came through last week despite Jones’ overall struggles, and he should keep it rolling as their true lone reliable receiver.

Marquise Brown, Ravens (at PHI). This passing game has been off, and he might see quite a bit of Darius Slay.

Jarvis Landry, Browns (at PIT). Landry should be silenced in the slot and cool off.

T.Y. Hilton, Colts (vs. CIN). Hilton was good last week but still not playable, so no.

Deebo Samuel and Brandon Aiyuk, 49ers (vs. LAR). One will draw will Jalen Ramsey in shadow coverage, and you can’t trust either with the messy QB situation.

Tee Higgins, Bengals (at IND). The Colts are solid with coverage on the outside vs. the slot.

Jerry Jeudy and Tim Patrick, Broncos (at NE). Stephon Gilmore might be playing, but regardless you can’t trust them on the road with the shaky QB against still a tough defense.

Golden Tate, Giants (vs. WAS). Golden will be silenced again thanks to Daniel Jones having eyes only for Darius Slayton.

Julian Edelman and N’Keal Harry, Patriots (vs. DEN). Damiere Byrd is a problem here, as is the limited passing volume and run-heavy approach, even against a hurting secondary.

Jonnu Smith, Titans (vs. HOU). The Texans’ linebackers will struggle to contain him and he’s now a bigger part of their offense.

T.J. Hockenson, Lions (at JAX). Hockenson comes back from a bye to exploit a team hurting at safety and linebacker.

Eric Ebron, Steelers (vs. CLE). The Browns also stink against the tight end, and he’s getting it done.

Evan Engram, Giants (vs. WAS). Engram scored on a run last week and nearly caught another TD, so he stays hot here.

Mike Gesicki, Dolphins (vs. NYJ). He’s essentially their slot wide receiver, and the Jets have no answers here, either.

Darren Fells, Texans (at TEN). If Jordan Akins (concussion) sits again he would be a solid play even with low targets.

Austin Hooper, Browns (at PIT). He might be the only Brown doing anything of note in the passing game.

Irv Smith Jr., Vikings (vs. ATL, $2,500 on DraftKings). Take advantage of the low price while you can because he should emerge more as their third target, and the matchup is spectacular.

Tyler Higbee, Rams (at SF). What gives with his usage vs. Gerald Everett? He can’t be trusted until there’s more volume again.

Zach Ertz, Eagles (vs. BAL). The matchup is good but Ertz is looking worse.

Hayden Hurst, Falcons (at MIN). It hurts how little he’s been a factor.

Dalton Schultz, Cowboys (vs. ARI). Just because his first name is Dalton doesn’t mean the new QB will use him much behind the wideouts.

Jimmy Graham, Bears (at CAR). Graham needed a crazy catch to save his value against the Buccaneers, and the Panthers have covered the position well.

Robert Tonyan, Packers (at TB). With Davante Adams back his role will be lessened, and the Bucs are good against the tight end.

Cameron Brate, Buccaneers (vs. GB). He was involved more but so was Rob Gronkowski, and Chris Godwin (hamstring) should be back.

Giants (vs. WAS, $3,200 on DraftKings). Kyle Allen should start again for Washington, and the Giants’ pass rush can wake up a bit at home.