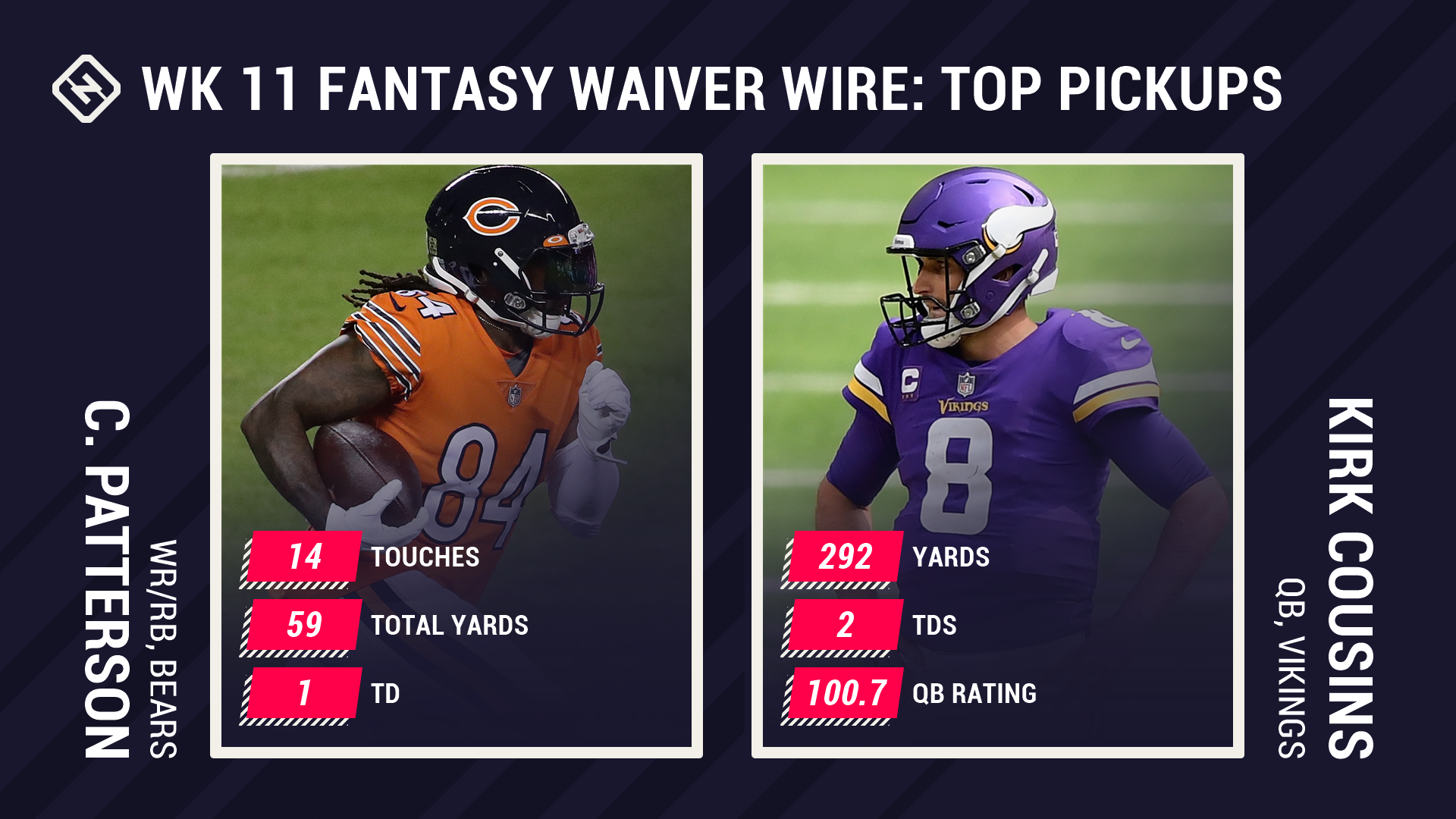 Even just a quick glance at our list of the top Week 11 fantasy waiver wire pickups and free agent adds lets you know this is going to be weird week on the wire. Most of the top pickups are RBs who have been hanging around a while (Wayne Gallman, Kalen Ballage, Nyheim Hines, La’Mical Perine, Carlos Hyde) with a few new guys (Salvon Ahmed, Cordarrelle Patterson) mixed in. You also have some WRs who are just begging to be picked up (Jakobi Meyers, Josh Reynolds, Cole Beasley, Sterling Shepard, Marquez Valdes-Scantling) despite no one being all that interested. Throw in a few QBs (Kirk Cousins, Tua Tagovailoa, Jameis Winston), a couple TEs (Logan Thomas, Jordan Reed), and a QB/TE combo (Taysom Hill), and you have plenty of guys who aren’t worth waiver claims but should be picked up after waivers clear around 4-5 a.m. ET on Wednesday morning in ESPN and Yahoo leagues.

Our full free agent list has even more of these “been-there, done-that” types, with backs like Malcolm Brown, Cam Akers, Gus Edwards, Jordan Wilkins, and Rex Burkhead and receivers like Keelan Cole, Tim Patrick, Jalen Reagor, and Allen Lazard. None of these guys are “must-haves,” but they could all have value down the stretch. Some guys might only have value next week, but if you’re in a must-win situation, then they’re vitally important, too. You can find those Week 11 QB, TE, and D/ST streamers at the end of this list. If you’re in the market for a new kicker, then our Week 11 kicker rankings are here for you and you alone. Seriously, not many people read our kicker rankings.

There isn’t an obvious top waiver claim this week, so if you don’t need immediate help at RB, you should probably just hold onto your claim. However, if you’re fighting for a playoff berth and need an RB (or WR) for Week 11, then by all means, use a top-three claim on someone like Ahmed, Ballage, Perine, Hyde, or Meyers. If you need a QB, go all-in for Winston. The values of these players could fall off a cliff even before this weekend, depending on the status of some of their injured teammates, but it’s likely you’ll get at least a week of use out of them. That might be all you need.

If you’re planning ahead a little more, Gallman figures to have value for at least two weeks after New York’s Week 11 bye, and Shepard and Beasley should be WR3s the rest of the way, at least in PPR leagues. It’s a little too early to say they’ll be difference-makers in the fantasy playoffs, but they can certainly help you get there.

Unless otherwise noted, only players owned in fewer than 50 percent of Yahoo leagues considered.

Kirk Cousins, QB, Vikings. Quarterback is too deep of a position for Cousins to be a “must-have pickup,” but after throwing for 292 yards and two TDs against the vaunted Bears defense in Week 10, he gets a highly favorable matchup against the Cowboys in Week 11. After that, he faces a reeling Panthers defense and Jacksonville. Things get tougher in the fantasy playoffs (@ Bucs, vs. Bears, vs. Saints), but Cousins is the type of free agent pickup who can help get you to the playoffs with the way he’s playing right now.

Cordarrelle Patterson, WR/RB, Bears. Starting RB David Montgomery (concussion) is expected back after the Bears’ Week 11 bye, so there’s no need to use a waiver claim on Patterson, but we got a definitive answer on Monday as to who Montgomery’s primary handcuff is. Patterson led the Bears in carries (12) and rushing yards (30) while adding two receptions for 19 yards and returning a kickoff for a touchdown. Patterson doesn’t have much value if Montgomery is healthy, but the Bears have arguably the best remaining schedule for RBs (@ Packers, vs. Lions, vs. Texans, @ Vikings, @ Jaguars, vs. Packers), so if anything were to happen to Montgomery, Patterson could be huge in the fantasy playoffs. Stash him now.

Carlos Hyde, RB, Seahawks. Seahawks coach Pete Carroll said on Monday that Hyde (hamstring) will likely play on Thursday night against Arizona. More important, he said Hyde is a “little bit ahead” of Chris Carson (foot) in terms of recovery. If Hyde is active and Carson isn’t, Hyde would likely operate as Seattle’s lead back and see a dozen-plus touches. That would give him flex value against a middle Arizona run defense that Hyde gashed for 68 yards and a score back in Week 7.

David Moore, WR, Seahawks. It was announced Monday that Tyler Lockett is dealing with a knee sprain ahead of Seattle’s Thursday tilt against Arizona. While the injury isn’t considered serious, it could keep him out on a short week. That would open the door for Moore, who has scored in two of the past three games and would likely see at least six targets in Lockett’s absence. Because Lockett is a game-time decision, Moore isn’t anything more than a speculative free-agent add, but he could pay off in a big way to start the week.

Taysom Hill, QB/TE, Saints. It seems likely that Jameis Winston will start and take most of the QB snaps for the Saints while Drew Brees (ribs) is out, but Hill figures to see more designed runs and could possibly throw a bit. That doesn’t necessarily make him playable in leagues where he’s only QB-eligible, but in leagues where he’s listed at tight end, he would become a low-end TE1 thanks to his rushing floor. Hill has run at least five times for 35 yards in each of the past three games, and last week he had a season-high eight carries for 45 yards. Against the Falcons, he could do major damage as a runner, receiver, and passer.