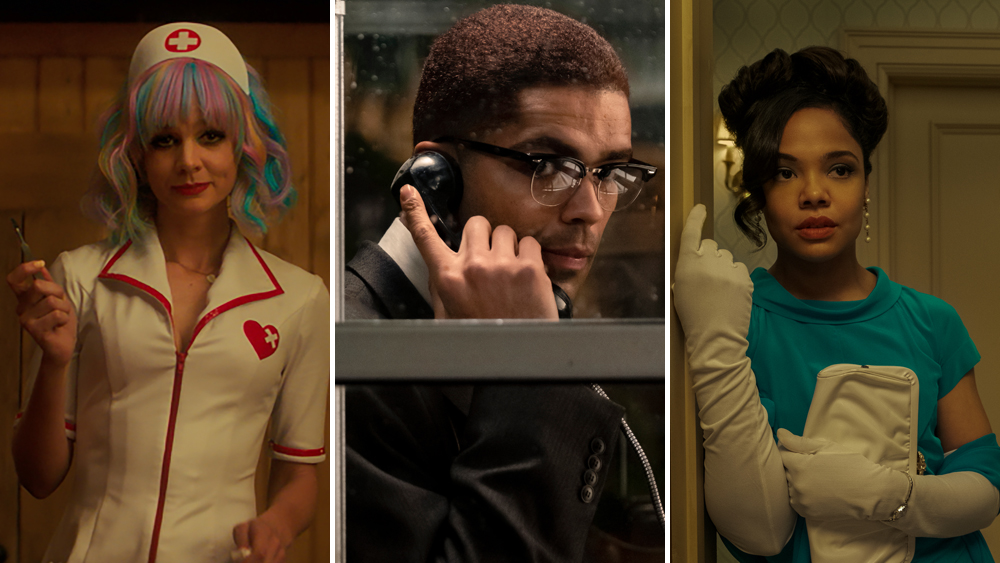 Written and directed by Emerald Fennell (Killing Eve), the Focus Features dramatic thriller Promising Young Woman has been a buzzy awards season title before its Christmas Day theatrical release. The Los Angeles Film Critics Association named Carey Mulligan Best Actress for her turn as the methodical Cassie who is out for revenge while Fennell received honors for Best Screenplay. The writer-director was also awarded the Milos Stehlik Breakthrough Filmmaker Award from the Chicago Film Critics.

The film, which made its world premiere at Sundance earlier this year, serves a different flavor of revenge. We are introduced to Cassie, who works as a barista after her future in medicine was derailed. She definitely does not take any B.S. from anyone and is unfiltered to anyone and everyone. Little do her friends and family know, she leads a double life as a woman who makes toxic men pay for their horrific behavior against women. Things take an interesting turn when an unexpected encounter gives Cassie a chance to right the wrongs of the past.

“I really like to play characters who aren’t easy to play on the surface, or take a bit of figuring out, or female characters that aren’t immediately likable or tick all the boxes,” Mulligan told Deadline at Sundance. “I read it and I thought, ‘I have no idea how to do it.’ If I read something, and I don’t know how to begin this, that excites me.”

Regina King makes her bold feature directorial debut with One Night In Miami based on the award-winning play by the same name from Kemp Powers, who also adapted it for screen.

The film from Amazon Studios follows one historic night in 1964 as four icons of sports, music, and activism gathered to celebrate one of the biggest upsets in boxing history. When underdog Cassius Clay, soon to be called Muhammad Ali, (Eli Goree), defeats heavyweight champion Sonny Liston at the Miami Convention Hall, Clay memorialized the event with three of his friends: Malcolm X (Kingsley Ben-Adir), Sam Cooke (Leslie Odom Jr.) and Jim Brown (Aldis Hodge). King puts this night under the microscope and creates a fictional account of their conversation, spotlighting the struggles these men faced and the vital role they each played in the civil rights movement and cultural upheaval of the 1960s… and their conversations on racial injustice, religion, and personal responsibility still resonate in 2020.

In his review, Deadline’s Pete Hammond praises the movie for focusing on the fateful night instead of the tragedy that was to come for some of the historic figures. “King instead lets this unique gathering stand on its own and speak for itself without telling us in what the future would bring,” he wrote. “I thought that was a strong decision that others might not have made.”

The ensemble performances also drive this heavy reflection on these icons. Hammond said, “As Malcolm X, the titular force behind the meeting and the conversation, British actor Kingsley Ben-Adir makes the role his own despite many of us having long memories of Denzel Washington’s towering work in Spike Lee’s three-hour 1992 biopic. Ben-Adir, however, brings a more relaxed and even personal view due to the circumstances of this particular and narrow focus.” In addition, he said that Goree invokes the essence of Cassius Clay while Hodge scores  “with a convincing Brown that even the man himself must be impressed with if he’s seen the film”.  As for Hamilton Tony Award winner Odom Jr. as Cooke, Hammond said he is “remarkable” and suggests that he should be cast in a stand-alone biopic of the great musical star.

One Night In Miami will open in Miami on December 25 and hit theaters nationwide on January 8, 2021 before dropping on Prime Video on January 15, 2021. Watch the trailer below.

“Shot like many a Hollywood so-called ‘woman’s picture’ that were made at the time, this film from writer-director Eugene Ashe has a real spirit of romanticism and lush production values that were prevalent in the films of such directors as Douglas Sirk and Jean Negulesco in the ’50s,” said Hammond in his review.

Written and directed by Ashe and from Amazon Studios, the film is set in New York during the summer of 1957. Robert (Asomugha), a saxophonist, spends late nights playing behind a less-talented but well-known bandleader, as member of a jazz quartet. Sylvie (Thompson), who dreams of a career in television, spends her summer days helping around her father’s record store, as she waits for her fiancé to return from war.

When Robert takes a part-time job at the record store, the two begin a friendship that sparks a deep passion in each of them. As the summer winds down, they go their separate ways. Years later, Sylvie and Robert cross paths again, only to find that while their lives have changed — but their feelings for each other remain the same. Sylvie’s Love also features Eva Longoria, Aja Naomi King, Wendi Mclendon-Covey and Jemima Kirke.

Both actors are terrific, with Thompson sporting an Audrey Hepburn -style look at points and running through 50 costume changes,” said Hammond. “Asomugha, a former pro football player-turned-actor/producer, acquits himself nicely here and is especially believable in scenes where he plays the tenor sax.”

On December 30, Netflix’s Pieces of a Woman will open in select theaters before hitting the streamer on January 7, 2021.

The film, which is adapted from acclaimed Hungarian filmmaker Kornél Mundruczó and screenwriter Kata Wéber’s play of the same name, follows Martha (Vanessa Kirby) and Sean (Shia LaBeouf), a Boston couple on the verge of parenthood whose lives change irrevocably when a home birth ends in tragedy. This becomes an arduous journey for Martha who must navigate her grief while working through fractious relationships with Sean and her domineering mother (Ellen Burstyn), along with the publicly vilified midwife (Molly Parker), whom she must face in court.

Pieces of a Woman made its world premiere in September at the Venice International Film Festival, where Kirby won the Volpi Cup for Best Actress. During the fest, Kirby told Deadline of the role: “I hadn’t found a character since Princess Margaret in The Crown, really, that I truly wanted to go really deep into.”

She added, “It’s an exploration of grief, and how everyone experiences grief differently. I hadn’t seen a film about this sort of subject before, really.”

The film is the first English-language film from Mundruczó, the Cannes regular whose previous credits include Un Certain Regard winner White God. Executive-produced by Martin Scorsese, Pieces of a Woman also stars Sarah Snook, Iliza Shlesinger, Benny Safdie and Jimmie Fails. Watch the trailer below.

Bryan Fogel, the director behind the Oscar-winning Icarus, brings another riveting subject to life with the Jamal Khashoggi documentary The Dissident which opens in select theaters on December 25 before hitting digital and on demand January 8, 2021.

The Sundance film could easily be considered a docu-thriller based on its subject matter. The Dissident dives deep into the murder of Washington Post journalist Jamal Khashoggi inside the Saudi consulate in Istanbul. With never-before-seen surveillance footage and unprecedented access, the docu exposes the deceit within the highest levels of power behind Khashoggi’s death, which made global headlines.

When Fogel visited Deadline’s Sundance Studio in January, he said that he rabidly followed the story of Khashoggi’s disappearance as soon as it hit the media landscape. “The story was phenomenal, just in the sense of what had happened,” said Fogel. “Here was a journalist who was writing about freedom of speech, fighting for democracy in his country—not a radical, not Muslim Brotherhood, not what was being presented in some media outlets.”

He continued, “This was a guy who truly was trying to have progressive reforms in his country, and for speaking his mind, he was murdered. So, there was this element that I felt very passionate about.”

Roadside Attractions is set to bring the classic fairytale Pinnochio to select theaters on Christmas Day.

Directed by Matteo Garrone, who co-wrote the film with Massimo Ceccherini, Pinnochio stars Oscar-winning actor Roberto Benigni, who directed, wrote and starred in a 2002 version of the fairytale. As the story goes, we are introduced to Geppetto (Benigni), the old woodcarver whose puppet creation, Pinocchio, magically comes to life with dreams of becoming a real boy. As the story goes, Pinocchio (Federico Ielapi) partakes in many misadventures on his journey of becoming a real boy.