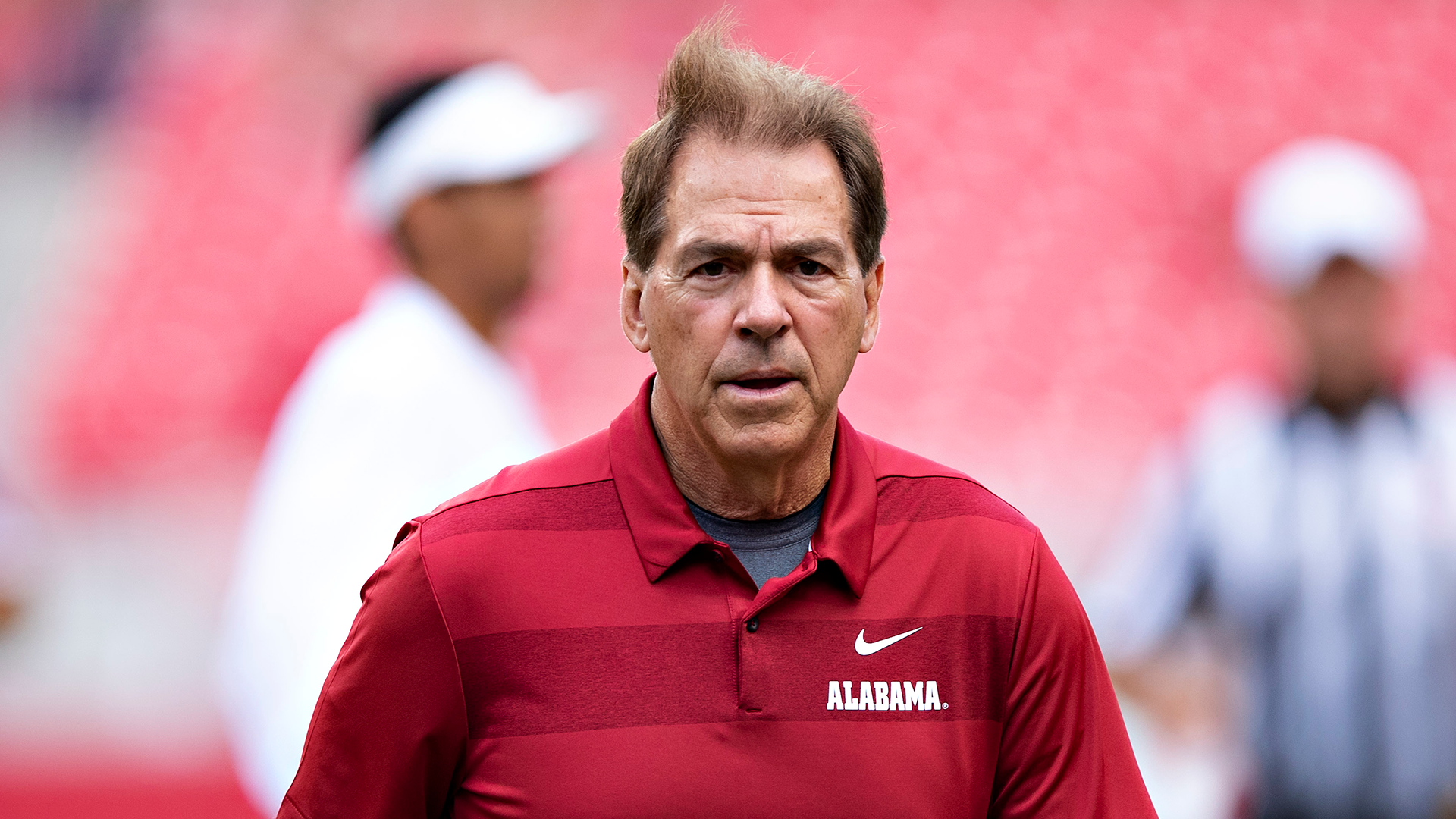 The college football world received a shock on Wednesday when Alabama announced that football coach Nick Saban and athletic director Greg Byrne both tested positive for the coronavirus.

The Crimson Tide coach has never missed a game, a mark that includes 183 contests through 13-plus seasons at Alabama. That streak is in jeopardy, however, as the Tide prepare to face No. 3 Georgia at home on Saturday. His absence from that game would mark a huge hole in the 2020 college football season, and presumably give Kirby Smart’s Bulldogs a leg up in the game.

That said, Saban’s status for the game isn’t set in stone. Because he is asymptomatic, he could conceivably meet a specific set of revised SEC COVID-19 protocols and coach his team from the sidelines.

Here’s everything you need to know about Saban’s positive coronavirus test: his quarantine length; SEC COVID-19 protocols; and the latest news regarding his diagnosis.

How long is Nick Saban out with COVID-19?

It’s uncertain how long Saban, 68, will be out because of quarantine and isolation. That period started at least at 2 p.m. ET Wednesday, when he informed players (via a Zoom meeting) that he had tested positive. Saban has since prepared the team from his home, while offensive coordinator Steve Sarkisian has taken over in-person preparations.

Whether Saban can return to normal football operations depends on whether he meets the SEC’s guidelines for return. Those protocols mandate a minimum 10-day isolation period after a confirmed positive, but also includes steps for asymptomatic individuals to return sooner. Saban has intimated that he could coach vs. Georgia on Saturday, suggesting that he can meet those prerequisites.

If he can’t, the minimum 10-day isolation period would make him unavailable to coach against Georgia, at least.

The SEC’s protocols mandate at least a 10-day isolation period for infections, confirmed by Polymerase Chain Reaction tests administered by third-party member PAE. But Saban’s asymptomatic status presents him a path to return in as few as 72 hours.

Below are the SEC’s guidelines for asymptomatic individuals:

Asymptomatic individuals with a positive COVID-19 RT-PCR test will be placed immediately into isolation. Within 24 hours of receiving the results of the positive PCR test, the individual may receive a second PCR test at the direction of team medical personnel (test to be administered by PAE).

Under the SEC’s protocols, Saban could return if he remains asymptomatic and produces three successive negative PCR tests — one within 24 hours of diagnosis and two more, 24 hours apart — prior to Saturday’s game. Considering that he was informed of his positive diagnosis no later than 2 p.m. on Wednesday, it’s feasible he could receive the final negative test in time to return vs. Georgia.

Because Alabama’s game vs. the Bulldogs is at 8 p.m. ET on Saturday — several hours after Saban’s hypothetical third PCR test — he could conceivably return in time to coach along the sidelines. Had kickoff been any sooner (say, 3:30 p.m. ET), that status would be in greater doubt. That’s because SEC protocols would not allow him to travel to the stadium while under quarantine. Moreover, NCAA Rule 1-4-11 would prevent Saban from contacting his team beginning 90 minutes before kickoff if he was still in isolation.

On Friday, Alabama released more information regarding Saban’s tests that suggest he will attempt to coach vs. Georgia:

“Coach Saban was evaluated again today by Dr. Robinson,” team doctor Jeff Allan said in the statement. “He continues to be asymptomatic and without fever. We are continuing to follow the SEC Return to Activity and Medical Guidance Task Force Protocol for testing asymptomatic positives. A PCR test was repeated Thursday by the SEC appointed lab and was negative.

“For clarification, the initial positive result came from an outside lab we’ve used to supplement the SEC-mandated testing. He will continue to remain in isolation and receive daily PCR tests. Should he have three negative PCR tests through the SEC appointed lab, each 24 hours apart, the initial test would be considered a false positive pursuant to SEC protocols and he would be allowed to return.”

“I found out earlier this afternoon that I had tested positive for COVID-19,” Saban said in a statement. “I immediately left work and isolated at home. At this time, I do not have any symptoms relative to COVID, and I have taken another PCR test to confirm my diagnosis.”

That said, Saban was upbeat with reporters with whom he spoke later that evening, saying he felt fine despite the diagnosis.

“I feel fine, so I’m not really concerned that much about my health, but you never know,” Saban said. “Look, I basically feel like when we’re in our own personal bubble here, everybody is in a much safer place. I think as soon as you travel, you get exposed to a lot more things and a lot more people.”

“Coach Saban was evaluated by our team physician Dr. Jimmy Robinson today. Coach remains asymptomatic at this point and is doing fine. He is continuing to self-isolate and will remain in the SEC testing protocol while being evaluated daily.”

— Thursday, Oct. 15: Saban, speaking remotely on his weekly radio show, says he is “feeling great” and would “hate” to miss Saturday’s game vs. the Bulldogs.

— Friday, Oct. 16: Allen provides further clarification on Saban’s status, suggesting it’s possible for him to return in time for Alabama-Georgia:

“For clarification, the initial positive result came from an outside lab we’ve used to supplement the SEC-mandated testing,” Allen said. “He will continue to remain in isolation and receive daily PCR tests. Should he have three negative PCR tests through the SEC appointed lab, each 24 hours apart, the initial test would be considered a false positive pursuant to SEC protocols and he would be allowed to return.”