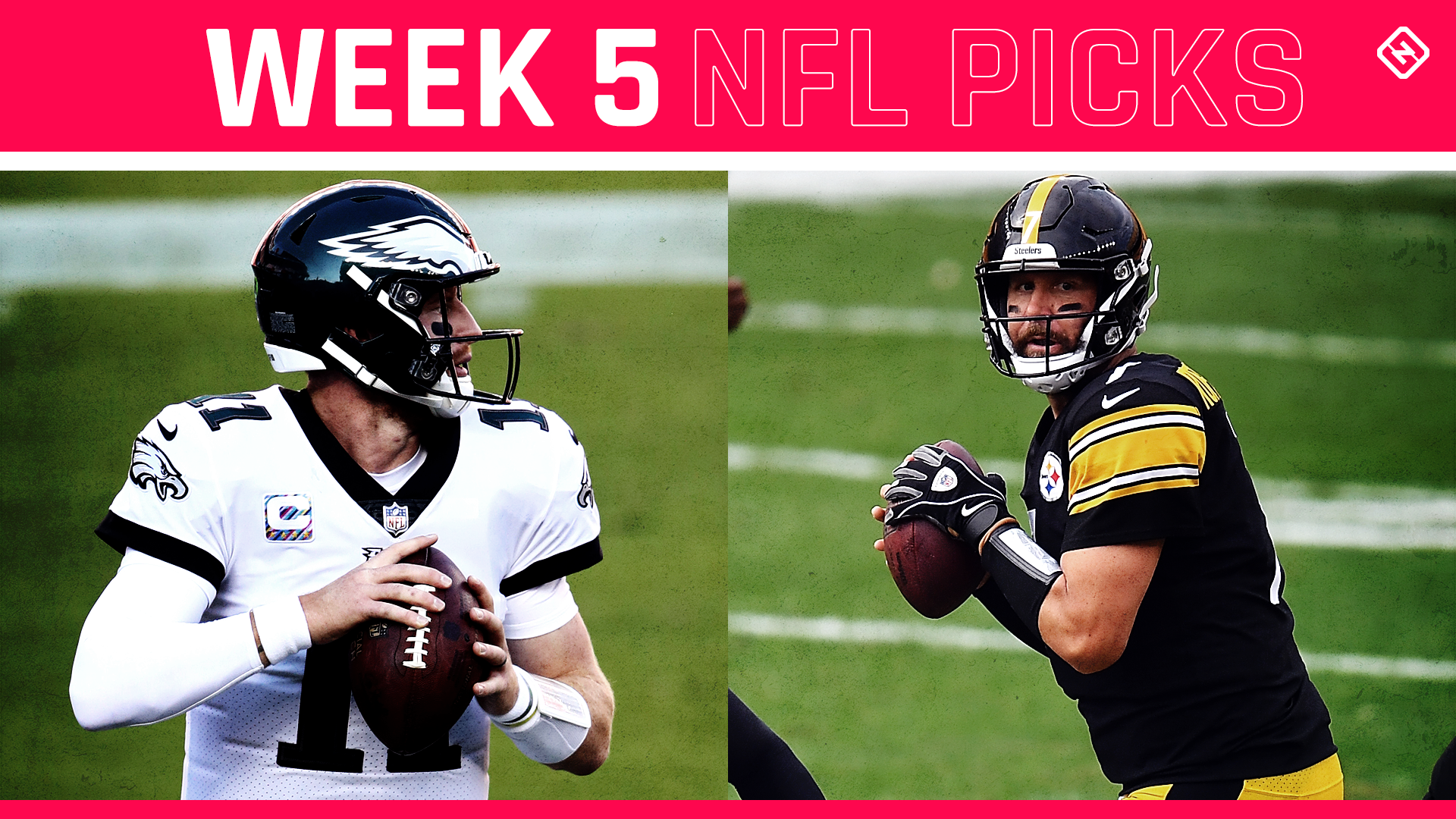 A strong Week 4 of NFL picks against the spread doesn’t mean much unless we follow with a smashing Week 5 of similar predictions. Through one month, it’s becoming a little easier to get a read on what good teams to trust and what bad teams to exploit.

This week there are plenty of double-digit favorites and a few tricky less-than-touchdown lines through which to navigate. There is becoming a wide separation between the league’s haves and have-nots, but there’s parity at the top and in the muddled middle to create more obstacles.

Time to dive into our latest fearless forecast with another 15 NFL games on the slate for Week 5. The point spreads come courtesy of Sports Insider:

NFL picks against the spread for Week 5

The Bills are the better all-around team with Josh Allen playing lights out, but the Titans are coming off a surprise bye because of their COVID-19 outbreak. They should return to normal in terms of practice, but their overrated defense finally gets burned by an offense clicking everywhere. They won’t be able to cover Allen’s ever-expanding weapons, led by Stefon Diggs downfield. The Titans will counter with plenty of a rested Derrick Henry and Ryan Tannehill can counter Allen with some big plays off play-action, but it won’t be enough at home.

Tom Brady arrived in GOAT form in Week 4, embracing the Bruce Arians-Byron Leftwich “no risk it, no biscuit” style of offense but also incorporating his own short-to-intermediate passing sensibilities. This is a tricky defensive matchup on the road on a short week with what figures to be a short-handed skill group again, now down O.J. Howard along with Chris Godwin and Leonard Fournette. Brady gets to duel with old Super Bowl 52 nemesis Nick Foles and gets revenge as the Bucs’ defense should rebound after being shellacked by Justin Herbert.

Pick: Buccaneers win 24-20 but fail to cover the spread.

The Steelers are in first place in the tough AFC North at 3-0. The Eagles are in first place in the weak NFC East at 0-2-1. The Steelers got an unexpected bye and should be frustrated about not getting a chance to improve to 4-0. They will take it out defensively on Carson Wentz with their fully loaded pass rush and secondary against the Eagles’ line and receiver limitations. The Eagles’ defense will do its best against Ben Roethlisberger with pressure, but the Steelers simply have too many backs and receivers who can cause matchup issues. Pittsburgh is the much better Pennsylvania team and will prove it by turning Philadelphia into Keystone (State) Kops.

The Colts are favored here on the road and it doesn’t make much sense. They have the better overall defense, that’s for sure, but the Browns have improved against the run under Joe Woods, which can help slow down the Colts’ biggest offensive strength. The Colts struggle with multi-dimensional offenses and don’t have the personnel to handle Kareem Hunt, Jarvis Landry, Odell Beckham Jr. and Austin Hooper in the passing game. Baker Mayfield will play well at home, while Philip Rivers will drop another clunker.

The Rams often save their best play for long East Coast trips under Sean McVay. McVay saw his star rise as Washington’s offensive coordinator and has FedEx Field familiarity. The offense might be in for another grind with the run contained and Jared Goff feeling some heat, but the defense will do plenty here with Aaron Donald getting in Dwayne Haskins’ face and Jalen Ramsey shutting down Terry McClaurin.

This sounds like a trap game for Arizona, but then again, the team fell into them hard against Detroit and Carolina and will be eager to rebound in a plus matchup for Kyler Murray and everything in the offense. The Jets simply cannot stop the run or cover DeAndre Hopkins. The Jets should be healthier around Sam Darnold to put up some points against a struggling Cardinals defense, but Murray will keep the visitors flying higher.

The Chiefs will be coming off an unexpected short week after playing the Patriots on Monday night, but they are staying at home, which helps. Arrowhead Stadium has been a bad place for Derek Carr in this rivalry, even though he’s playing well this season. The Raiders’ young cornerbacks cannot cover the Chiefs’ wide receivers downfield and their run defense is struggling too ahead of facing Clyde Edwards-Helaire. The Chiefs’ pass rush and secondary will put the finishing touches on the rout.

The Texans’ defense cannot stop the run or the pass. They are weak in the middle of the field and weak in cornerback coverage, too, away from Bradley Roby. That’s not good news facing James Robinson and D.J. Chark. Luckily the Jaguars don’t really have answers for either Deshaun Watson, David Johnson or Will Fuller. Houston has a lot of problems, but it finally gets in the win column back at home.

When the Ravens can run well with Lamar Jackson and their three-man diverse committee and use that to get the ball to Marquise Brown downfield and to Mark Andrews in the red zone, they are unbeatable. They love playing from ahead and turning on the snowball effect as their defense is better equipped to rush the passer. That should happen here at home against the Bengals’ defense, who will have more bright offensive moments for Joe Burrow and Joe Mixon but not enough.

The Falcons are the Texans of the NFC South. Their defense is terrible and their offense, namely QB Matt Ryan, is bearing an impossible burden even with positive game scripts. The Panthers are playing well with Teddy Bridgewater as their offense has become more diversified without Christian McCaffrey. This screams high-scoring game in a controlled environment. There won’t be much of anyone covering any of the many talented, fast, quick wide receivers on the field. Atlanta barely escapes by a field goal but stays in last place.

The 49ers should get Jimmy Garoppolo back in the lineup this week to support George Kittle, Deebo Samuel and Brandon Aiyuk. They should also be able to run the ball much better than in the Eagles’ matchup to set up favorable passing shots. Ryan Fitzpatrick has gone cold again for the Dolphins and him being the leading rusher for his team won’t cut it. San Francisco takes out its Philadelphia frustration on long-traveling Miami.

The Patriots go from rare double-digit underdogs to more usual double-digit favorites. It really doesn’t matter who starts at quarterback for Denver as it’s trending to be Drew Lock returning. The Patriots’ defense will stuff Melvin Gordon first and trust their safeties and cornerbacks to contain things downfield with tough tight end matchup Noah Fant missing the game. Assuming Cam Newton is back, he can help the Patriots run all over the Broncos’ front and also hit on some deep pass plays.

The Cowboys needed a miracle to beat the Falcons at home and didn’t get their prayers answered against the Browns. For a change, they won’t be relying on Dak Prescott throwing 50-plus times and can actually go back to running Ezekiel Elliott to protect a lead providing by getting ahead with big plays in the passing game away from James Bradberry. The Giants’ offense will wake up a little more with Golden Tate and Evan Engram to attack the key weaknesses of Dallas’ defense, but the Cowboys will win going away with a healthy second-half dose of Zeke.

The Vikings will be coming out firing with Kirk Cousins to Adam Thielen and Justin Jefferson, but also know Dalvin Cook’s running is a key source of chunk plays and will do their best to score touchdowns while also controlling time of possession to protect their defense. Unfortunately, the Seahawks will have the same game plan with Chris Carson to complement Russell Wilson to Tyler Lockett and DK Metcalf. These teams played a high-scoring thriller in Seattle last December and this game will mirror that with a fantasy bonanza in prime time.

Pick: Seahawks win 41-34 but fail to cover the spread.

The Chargers are rolling offensively with rookie Justin Herbert looking like the real deal with his big arm and athleticism. The concern here is not having their key offensive cog, Austin Ekeler, or their version of Alvin Kamara. The Saints will have Kamara and Latavius Murray up and running well and there’s a good chance Drew Brees finally gets Michael Thomas back this week to boost him in the passing game. The Saints’ defense gets a break by stopping the run and getting after Herbert well with a lead.

Stats of the Week