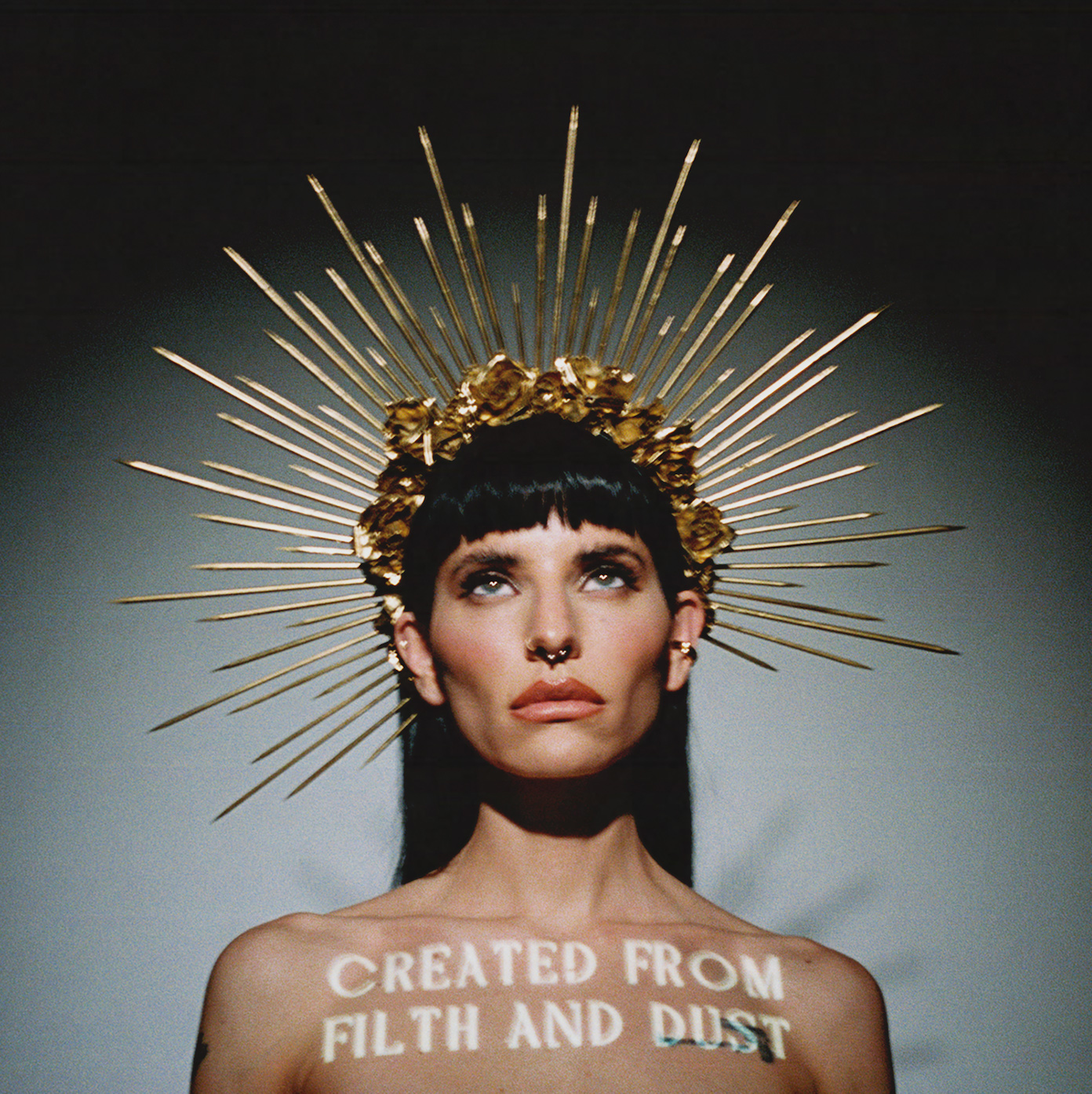 The last we saw of Juliet Sims in November 2020 she was burning in a sea of flames in her “All-American” video.  She has since arisen as her alter ego, Lilith Czar, with a new look and sound.  Gone is the blonde hair and pop sound, replaced instead by jet black hair and hard rock vocals.  Her re-birth and transformation started after her switch to Sumerian Records.  The first two songs with the new label, still as Juliet Simms, were “Bad Love” and “100 Little Deaths”.  These songs started the shift toward her new sound.  Both are included in the new Lilith Czar album, Created From Filth and Dust, which was released on April 23rd.

This isn’t the first time that a musical artist or band has changed their persona or musical style.  The Beatles became Sgt. Pepper’s Lonely Hearts Club Band, Eminem turned into Slim Shady, David Johansen transformed into Buster Poindexter, Greenday slides back and forth into both Foxboro Hot Tubs and The Network, while David Bowie took the guise of Ziggy Stardust. Each had different motives whether it be for a concept album, marketing gimmick, or just a way of expressing a different less commercial musical side. Lilith Czar explained her origin, “When you find yourself beaten down by the world, in those times you can either let it destroy you or let it create you.” She further explains, “I know who I am now, completely. I’ve found my purpose, creating art to inspire others to stand up for what they believe, to fight for their dreams, and to never give up.”

Created From Filth and Dust is primarily a hard driving rock album with a few curves thrown in to change the pace. The first single released from the album was “King”.  The song starts to show the singer’s transformation from pop to rock with pop sounding verses and guitar driven rock choruses. Women have made strides over the last decade.  However, power still resides primarily with males.  This song is about taking control in a man’s world. If it is a man’s world, then Czar wants to be King.

Czar slows things down for the albums’ second single, “Lola”.  The song is filled with arpeggiating guitars. Her vocals are much softer.  She sings about the vulnerability of being in the music industry and forgetting herself and where she came from.  There’s a longing to step back and go back home where the dreams started. “I wrote ‘Lola’ in Nashville right after being on the road for a couple months. The come down from touring is hardly something you can explain. You just feel misplaced and uneasy,” Lilith recalls. “Simultaneously I was going through a self-discovery and entering into a new phase of my life. Darkness in the rear, I started to realize I had let something go and inversely let something else in.”

She continues: “I wrote this song about an extremely hard time in my life, it’s about losing ourselves and becoming the monster that haunted you as a child. It’s a plea to meet and be taken back by the person you abandoned; your child self who set off in the world so full of hope. It’s no secret a rock n roll lifestyle is like being swallowed by the devil. Lola is me, an alter ego adolescent self before the world bore it’s teeth and this is my version of a rock n’ roll lullaby redemption song.”

“Anarchy” is what rock music was designed to be; anti-authority, rebelling against the norms and living your life the way you want.  It’s an anthem rallying against those that think there way of doing things is the right way and only way. It’s a fitting song for the political environment we live in today.  “Anarchy” could easily be transformed into a punk song sung by a band like the Clash, Sex Pistols or Ramones or a protest song by the likes of CCR or Country Joe and the Fish.

Czar’s vocal changes throughout the album display a diverse range of styles. In “Feed My Chaos” she is a rocker sounding like Taylor Momsen from The Pretty Reckless.  Her cover of the classic “Edge of Seventeen” sees her voice develop a raspy tone remarkably similar to the original singer Stevie Nicks. “Diamonds to Dust” is an acoustic song showing Czar is capable of singing a ballad in a clean conventional style.

Created From Filth and Dust is an album comprised of hard rock, anthems, classics and ballads.  It saw the metamorphosis of Juliet Simms into Lilith Czar. The album has more cohesion than her prior music.  Previous songs and albums saw Simms searching for an identity.  Whether this was just a marketing ploy or a result of soul searching, it appears that maybe Simms has finally found her true identity and it is Lilith Czar.

For more information on Lilith Czar, visit her at: