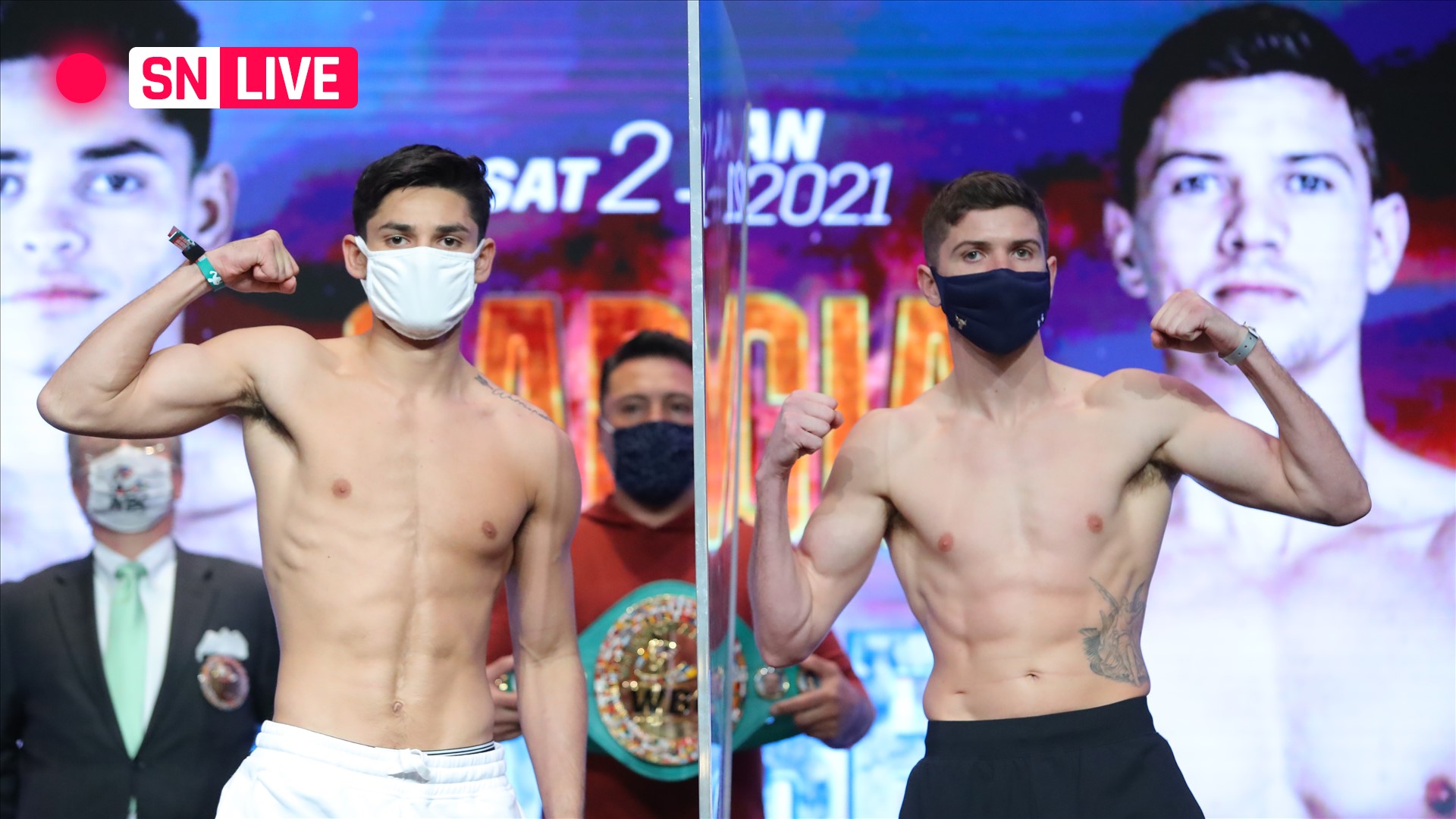 Ryan Garcia kicks off the new year with a highly anticipated showdown with Luke Campbell for the interim WBC lightweight title on Saturday, Jan. 2, at the American Airlines Center in Dallas.

It will mark Garcia’s return to the ring for his first bout since the COVID-19 pandemic put the sporting world on hold last year. The fight was originally slated for Dec. 5, but was postponed when Campbell tested positive for coronavirus. The fight is now reset with a limited number of fans in attendance following social distancing guidelines. The winner will be in line to challenge current WBC lightweight champion Devin Haney.

Garcia (20-0, 17 KOs) vs. Campbell (20-3, 16 KOs) has been billed as “Fire & Ice,” with Campbell aiming to put an end to the surging star’s undefeated streak. The 2012 Olympic gold medalist not only stands as Garcia’s stiffest test to date, but also has faced the likes of Vasiliy Lomachenko and Jorge Linares. The 33-year-old has never been stopped and has plans to put himself back into title contention with a win on Saturday night.

Garcia is one of the leaders of the new generation of fighters. Initially thought to just be a social media superstar, Garcia has raised eyebrows with recent performances that include a pair of first-round knockouts against Romero Duno and Francisco Fonseca. The talented fighter with scintillating speed and a blistering left hook has improved tremendously under the tutelage of Canelo Alvarez’s trainer, Eddy Reynoso.

Will Garcia catapult himself into title contention or can “Cool Hand” Luke put an end to the hype?

6:25 p.m.: As expected, Campbell enters the ring to jeers from the crowd at American Airlines Center in Dallas as Queen’s “We Will Rock You” plays. Garcia follows and the crowd erupts. It’s clear that Garcia is a star but can he prove that he’s also championship material? We soon shall see.

6:11 p.m.: The main event is up next! Who are you picking? Will Ryan Garcia add another knockout to his resume against his toughest opponent on paper or will “Cool Hand” Luke put out the burning fire of Garcia?

6:05 p.m.: Roger Gutierrez needed every single one of those knockdowns as he won a narrow decision with scores of 113-112 across the board to become the new WBA (Regular) super featherweight champion. The final knockdown in the last round was the difference maker that pushed him ahead in the final minute. Incredible.

In November, Roger Gutierrez’s mother passed away due to cancer.

He dedicated his fight tonight to her, and was overcome with emotion after being awarded the victory. 🙏 pic.twitter.com/NuTiPVCj90

6:00 p.m.: With the fight hanging in the balance, Gutierrez scores another knockdown in the final round with a left hook that clipped Alvarado. Alvarado managed to survive the round and controlled a lot of the fight. However, three knockdowns are nearly impossible to overcome…unless your name is Juan Manuel Marquez. We’ll see how the judges score it.

5:52 p.m.: Entering the championship rounds, the fight is likely up in the air. After Alvarado fought his way back into the fight, the past few rounds have seen more of a nip and tuck affair between the two fighters. It’s anyone’s guess how the judges will have it.

5:31 p.m.: This fight has shifted drastically over the last two rounds. Gutierrez appears to have completely punched himself out while Alvarado is rejuvenated and taking over. Those two knockdowns will certainly be a factor but Alvarado has recovered and pulled himself back into the fight as we enter the sixth round.

5:23 p.m.: Things have started off much different this time around as Roger Gutierrez dropped Alvarado twice in the third round. But Alvarado demonstrated tremendous heart and fought back to close the round. This fight could end up being special.

4:56 p.m.: After watching his twin brother turn in an exciting performance, Rene Alvarado (32-8, 21 KOs) is up next and will defend his WBA (Regular) super featherweight title against Roger Gutierrez (24-3-1, 20 KOs). It’s a rematch from their fight three years ago that Alvarado won by knockout. Will we get another series of fireworks?

4:48 p.m.: Kriel fought his way back into the fight but Alvarado put on a violent exhibition of punishment in the 9th round that nearly ended the fight. The 10th round continued the savage display of power punching as Alvarado strafed his opponent with a right hand and followed with a left over the top. The referee saw enough and rescued Kriel from further punishment.

4:33 p.m.: Another knockdown by Alvarado sent Kriel crashing to the canvas as the punishment continues into the fourth round. The only thing we can credit Kriel for is his punch resistance. He doesn’t have the power to keep Alvarado off of him. However, Kriel has managed to have a pair of decent rounds in the fifth and sixth rounds. He’s still losing but maybe he’s making this more of a fight?

4:17 p.m.: Alvarado has come out like a man possessed in the first two rounds. Ruthlessly aggressive as he charges forward and lobbing nothing but power punches. Kriel is trying to fight Alvarado off of him but to no avail. A left hook by Alvarado dropped Kriel in the second round and could be the beginning of the end.

3:50 p.m.: Curiel made easy work out of Agaton with a second-round stoppage. It was one-way traffic from the opening bell as Curiel dropped Agaton in the opening frame with a wicked body shot. Curiel wasted no time finishing the job as he charged Agaton in the second round and unleashed a barrage of power punches to get the stoppage.

3:36 p.m.: We kicked off the day of events with Ryan Garcia’s younger brother, Sean, squeezing out a narrow majority decision victory over Rene Marquez. It was a tough go for Garcia, who improved to 6-0, as Marquez gave him all he could handle. After a slow start, Garcia began utilizing his jab to keep his aggressive foe at range while hurting him with a right hook in the third. It was just enough to overcome one even card of 38-38 with two scores of 39-37 to remain undefeated.

The Garcia vs. Campbell main card begins at 3 p.m. ET. Garcia and Campbell expected to make their ring walks about 6 p.m. ET, although the time depends on the length of the earlier fights.

How to watch Garcia vs. Campbell fight

The Garcia vs. Campbell fight will stream live globally on DAZN, to more than 200 countries and territories, including the U.S. and Canada.

Those interested in watching the fight can find DAZN on a number of different systems, including, but not limited to, Amazon Fire TV/stick, Android, Apple TV, Google Chromecast, iOS devices, Playstation 4, Playstation 5, Xbox One, Xbox Series X/S and Roku.

Viewers can also find it on DAZN.com using browsers like Chrome, Firefox, Internet Explorer and Safari.