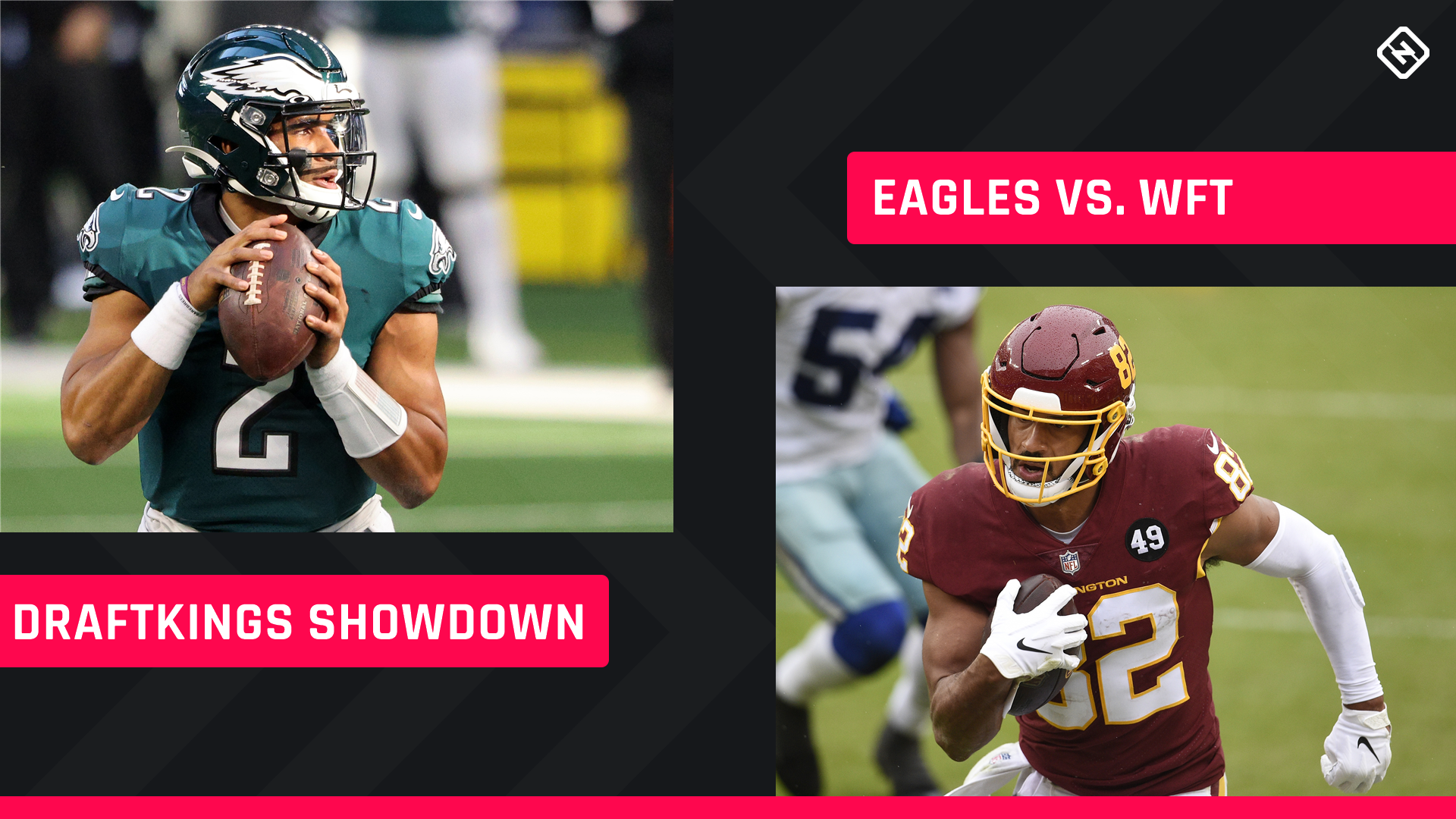 Washington vs. Philadelphia on Sunday Night Football to close out the 2020 NFL regular season might not look appealing on paper. Sure, it’s for the Washington Football Team’s chance to win the NFC East, but it’s also the lowly NFC East we’re talking about. But thankfully for NFL DFS purposes, there’s a lot of appeal in these players when putting together a DraftKings Showdown lineup.

Rather than get too cute, we decided to captain Jalen Hurts. He has the most upside on the slate by a significant margin, and sometimes you’ve just got to swallow the big salary and go for it. Behind him, though, we’ve loaded up on Washington in the hopes that its chase of a division title will result in a solid all-around game.

MORE DK SHOWDOWN: How to win a Showdown contest

Because of the relatively limited upside of the Washington passing game besides piling up receptions, Hurts is our choice for captain. He’s the most expensive player on the slate but for good reason — he’s the only player on this slate with massive upside thanks to the combination of his running and passing abilities. He’ll be a popular captain play, but if he’s going to have a big game and knock Washington out of the playoffs, we want the biggest piece of it we can get.

Gibson played in Week 16 despite being dinged up, and he’s being managed in practice in the lead up to Week 17 with reports indicating he’ll suit up yet again. He’s been one of the best rookies in football this year and is a real threat on the ground and in the pass game. That makes him relatively game-flow safe, which is great for our second-highest salary in a game that’s not that easy to call.

In three of the past four weeks, McKissic has seen 10 targets. He often operates more like a receiver for Washington at this point than a running back, but that’s fine for our purposes in DK’s PPR scoring. Especially if Hurts and the Eagles get out in front here, McKissic should see another big target day to extend his double-digit DK point streak to five games.

Thomas is yet another WFT who’s become a reception machine in recent weeks, and stacking up on them here should allow us to pop on a few of the offense’s biggest DK point outputs. Thomas saw 16 targets two weeks ago and another 12 in Week 16. The converted quarterback may finally be coming into his own at a huge time for Washington.

Maybe this whole Washington grouping is chasing targets. Sims has had at least eight of them in three of his past four games. But it’s also our way of moving away from the relatively low upside of either Alex Smith and Taylor Heinicke and trying to capture the sneaky upside that short catches provide on DK. The points will pile up in a hurry if Washington is forced to throw a lot Sunday night.

It frankly wasn’t the plan to fade Eagles this much when sitting down to make the lineup, but that’s where pricing led us. Scott is interesting both as a pass-catching rusher and also because Miles Sanders is out for a team that has nothing to play for. That can bode well for Scott getting some Week 17 production at a small price.

Live Nation On When Large Concerts Can Come Back
As UNC’s Roy Williams approaches 900 wins, a look at the nine defining victories of his Hall of Fame career
Why One Major Movie Theater Will Stay Closed New York City, Despite Reopenings
Russell Wilson trade rumors: Patriots, Jets, Washington best realistic fits for disgruntled Seahawks QB
Why Hobbs And Shaw 2 Won’t Come Out For A Long Time, According To The Producer