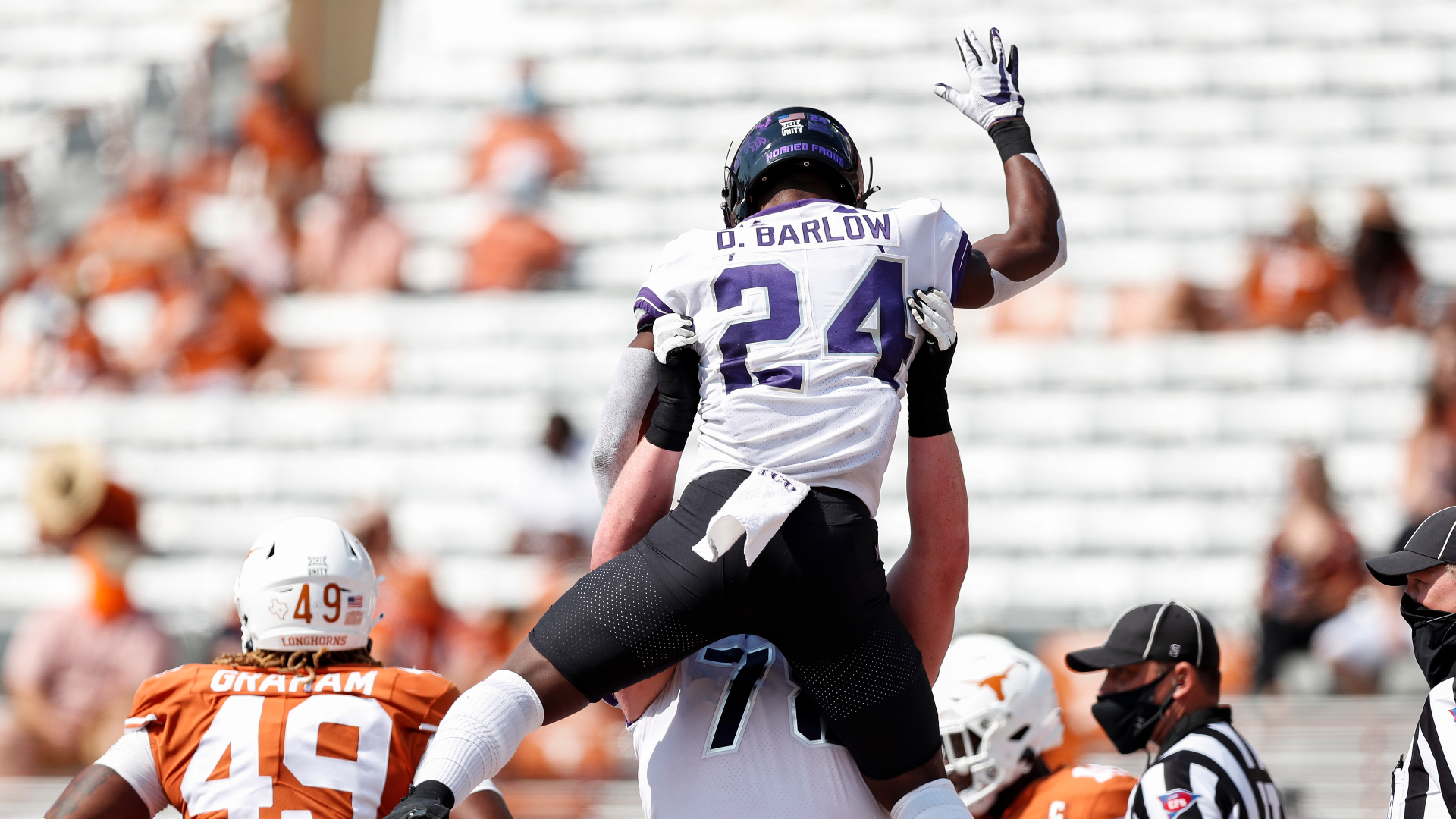 The Texas-TCU game fittingly ended with a yellow flag on the field.

Horned Frogs quarterback Max Duggan ran out of the end zone for what would have been a game-ending safety, but the offense was penalized for holding in the end zone. The refs sorted it out, and it was game over. No. 9 Texas lost 33-31 to TCU in a mistake-filled mess of a football game where both teams combined for 26 penalties for 201 yards.

Those yellow flags might as well be white flags.

The Big 12 has all but surrendered its College Football Playoff spot at this point. The Texas-Oklahoma rivalry game on Oct. 10 is now an elimination game, knowing the Playoff has never accepted a team with two losses. No. 17 Oklahoma State is the lone unbeaten remaining, and the Big Ten and Pac-12 haven’t even started playing yet.

A season that started with Kansas State losing to Arkansas State and Iowa State losing to Louisiana continues to spiral in the wrong direction. A week after No. 18 Oklahoma lost to that same Wildcats team, Texas took its turn for the worse against a TCU team coming off a loss to Iowa State.

All those transitive properties are working against the Big 12.

The Longhorns had a chance to improve to 3-0 for the first time under fourth-year coach Tom Herman — which is head-scratching on its own. But running back Keontay Ingram fumbled on the 1-yard line with 2:32 remaining, thwarting what would have been the second comeback in as many weeks under senior quarterback Sam Ehlinger.

Perhaps that was the return favor after last week’s 15-point comeback against Texas Tech. We don’t have to ask the ageless question again, at least for the 2020 season.

The Longhorns aren’t back. Texas now has eight losses of seven points or fewer since 2018 under Herman, and this was the second consecutive year it couldn’t get past TCU.

The Longhorns simply way too many mistakes. Texas linebacker Juwan Mitchell was ejected in the first half. Ehlinger threw an interception in the final two minutes of the first half, which the Horned Frogs converted into a field goal.

Texas committed nine penalties for 70 yards in the first half and 12 penalties for 92 yards in the game. Despite all that, Ehlinger (17 of 36 passing, 236 passing yards, four touchdowns) still positioned the Longhorns to take the lead. Ingram’s fumble doomed Texas and put the program in the same-old position heading into the Oklahoma matchup.

Even if Texas had won the game, those questions would be valid: There wasn’t anything to suggest the Longhorns looked like a top-10 team, let alone a College Football Playoff team. It’s easy to change the channel when that many penalties are called. The same could be said about the entire conference at this point.

The eventual champion has to win out for a chance at the Playoff, and the Sooners have been the best bet to do that each of the last three seasons. But Oklahoma has given the committee something other than Big 12 regular-season play to consider: In 2017, Baker Mayfield and Oklahoma earned a nonconference victory at Ohio State; in 2018, Kyler Murray corrected the regular-season loss against Texas in the Big 12 title game. In 2019, Jalen Hurts was a feel-good story as a Heisman finalist.

Those Oklahoma teams all lost to SEC teams in the College Football Playoff.

The conference doesn’t have that luxury in a season impacted by COVID-19, and that could open the door for either the Pac-12 or two teams from another Power 5 conference. Hey, No. 22 BYU and SMU look more like Playoff contenders at this point.

Maybe the Big 12 should bring them in.

Laugh all you want: Texas and Oklahoma aren’t enough in 2020.