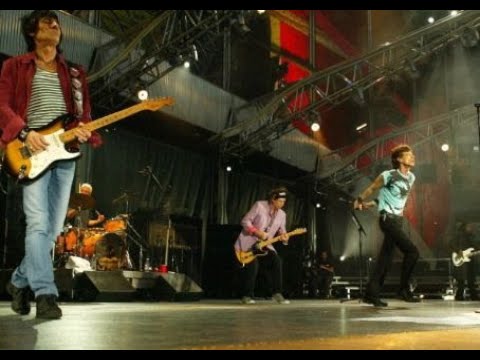 The Rolling Stones did in Paris three shows: An Arena Show in Palais Omnisports on 7 July; This Stadium Show in Stade France and on 11 July a Theatre show in L’Olympia Bruno Coquatrix.

On the B-stage the rolling Stones played Miss you (which was not played often during the Licks Tour); Little Red Rooster (A Willie Dixon cover) and Street Fighting Man.

The Rolling Stones played the following 19 songs:
Brown Sugar
Start Me Up
You Got Me Rocking
Don’t Stop
Angie
You Can’t Always Get What You Want
Bitch
Tumbling Dice
Band introductions
Slipping Away
Before They Make Me Run
Sympathy For The Devil
Miss You (B-stage)
Little Red Rooster (B-stage)
Street Fighting Man (B-stage)
Gimme Shelter
It’s Only Rock’n Roll (But I like it)
Honky Tonk Women
(I can’t get no) Satisfaction
Jumping Jack Flash (encore)

The Licks Tour was a worldwide concert tour undertaken by The Rolling Stones during 2002 and 2003. Shows were played in stadiums, Arenas, and Theatres.