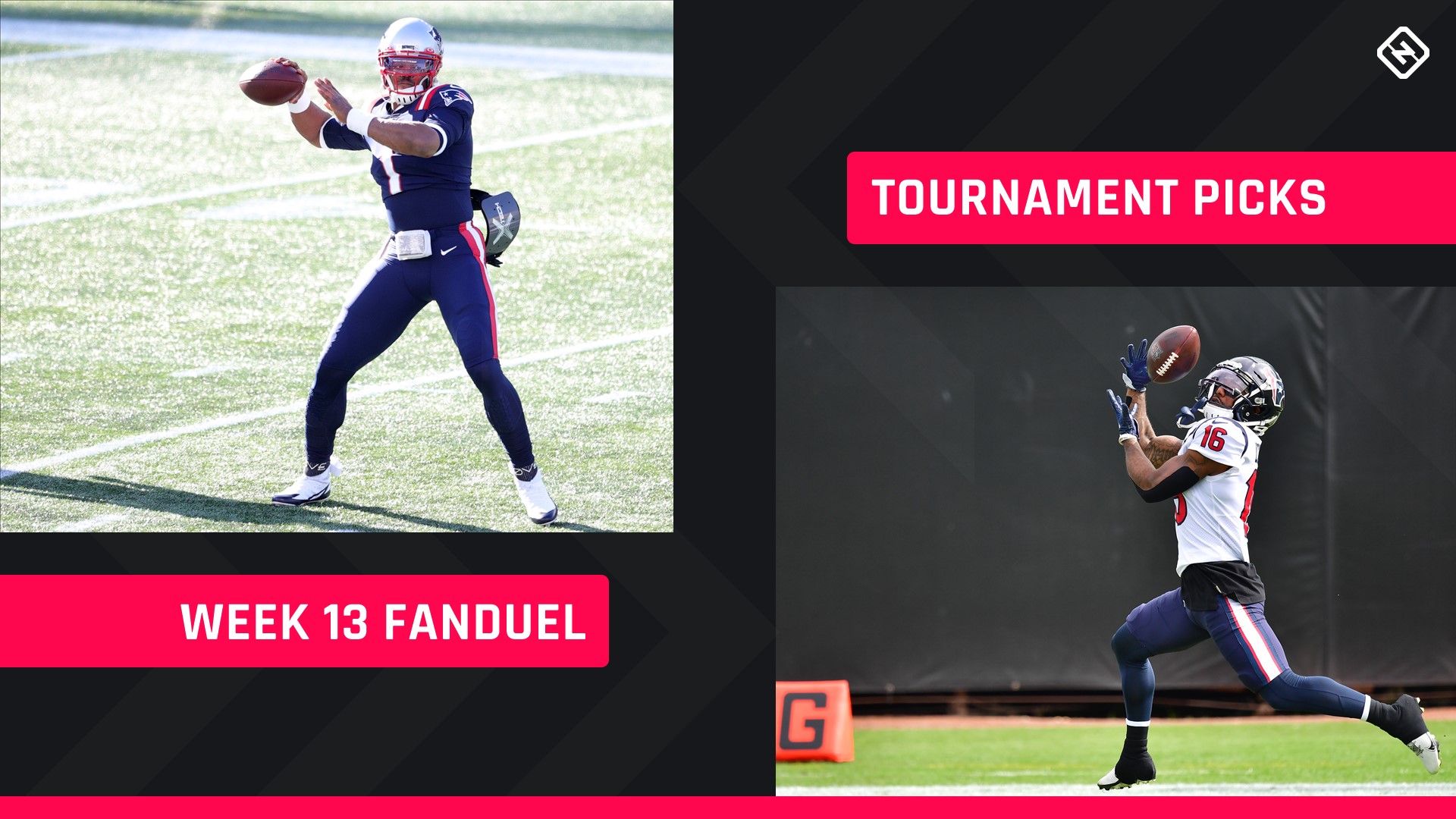 Sometimes the temptation wins out, and that’s what happened in our Week 13 FanDuel GPP lineup. Both Dalvin Cook and Derrick Henry were appealing at their sky-high running back prices, and we found a way to pay for both. Sure, it requires some value sleepers elsewhere, but so does every DFS tournament lineup to some extent. Why not lock down the two safest RB plays of the week?

Don’t worry, we have some classic tournament risks, too. There’s a Cam Newton and Jakobi Meyers stack and reliance on both Darnell Mooney and Keke Coutee. Sometimes, you have to take big swings to cash in tournaments. Or, in the case of Week 12, we pretty much just needed Tyreek Hill, whose big game led our GPP lineup above the cash line.

Newton hasn’t been on a hot stretch, but this is the type of matchup that can get him right. The Chargers have allowed more than 20 FD points per game to quarterbacks this season, and we know how quickly Newton can rack up fantasy points with runs near the goal line. He’s worth the risk this week.

Cook is supposed to be fine after injuring his ankle in Week 12, and as long as there are no negative reports throughout the week on that injury, he’s a great play this week. The Jags have allowed the fifth-most fantasy points to running backs this season in FD scoring average, and Cook might just be the best back they have to try and stop (at least besides the next guy in our lineup).

Admittedly, this isn’t the cake-walk matchup that Cook gets, but sometimes you just have to count on Henry to deliver. That’s what he did in Week 12 against the Colts, and he’s one of the more matchup-proof rushers in recent memory. He’s going to get his, and we want his production in our lineup.

We already wrote about the Chargers not having the best pass defense, but this is mostly about trusting Meyers the way Newton trusts him. It doesn’t mean big production every week, but more often than not of late, it’s been Meyers making the difference when Cam has a good day.

Mooney might just be a big tease. He goes deep a lot and he’s very fast, so he’s tantalizing for GPP lineups. But the Bears don’t connect with him very often. If there was ever a week for the connection to be made, it might be against the Lions, who allow nearly 33 FD points per game to wideouts. At this price, Mooney at least appears to offer some upside.

With a suspension ending Will Fuller’s season, Kenny Stills waived and Randall Cobb (toe) still hurting, Coutee could be as high as the No. 2 receiver for Houston in this game. Even if Cobb comes back, Coutee will play a key role for Deshaun Watson and be good enough to pay off such a low price.

Hockenson played great on Thanksgiving and has more consistently tapped into his upside in his second year out of Iowa. In Week 1 against Chicago, Hockenson caught five passes for 56 yards and a score, and it’s fair to expect a similar output this week.

Lazard’s return from injury has been a boon to Aaron Rodgers and has taken most of Marquez Valdes-Scantling’s targets away. In a game that Green Bay should romp, Lazard has a good chance of heavy usage and could find the end zone.

Carson Wentz is leading the league in interceptions thrown and sacks taken. Need we say more? Yes, Green Bay’s defense occasionally looks like it has forgotten how to tackle, so this isn’t a selection without risk, but there’s probably more upside than downside here at this price.