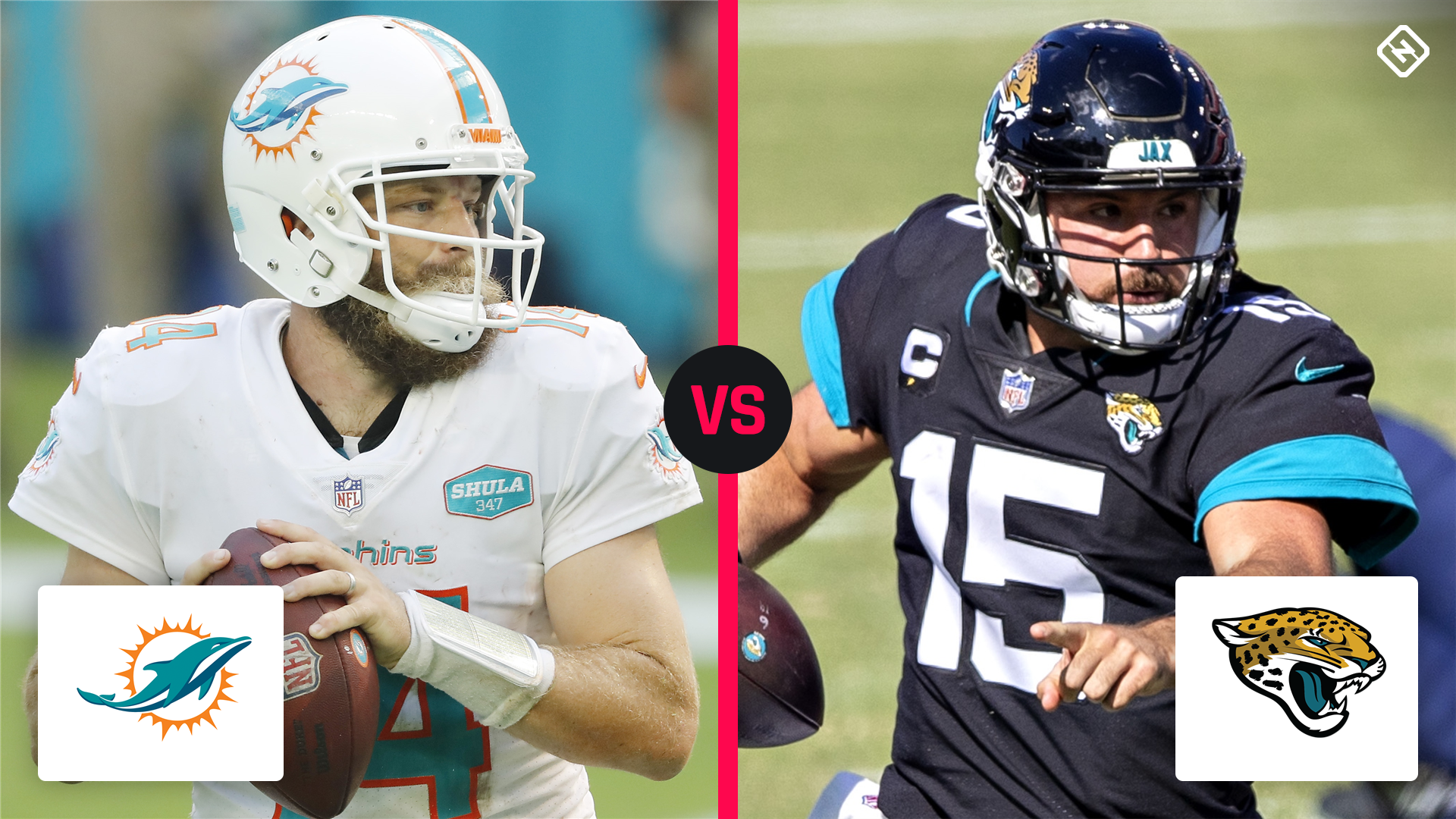 A pair of social media’s favorite quarterbacks meet in the third “Thursday Night Football” game of the season, as Ryan Fitzpatrick and the Miami Dolphins head to Jacksonville to face Gardner Minshew and the Jaguars at TIAA Bank Field.

Two weeks ago many had the first pick in the 2021 NFL Draft signed, sealed and delivered to Jacksonville. Instead, the Jaguars (1-1) have gone out and shocked Indianapolis in Week 1 and lost a squeaker in Week 2 to Tennessee. Minshew has thrown for six touchdowns and ranks third in the league in completion percentage above expectation. Even the run defense has held its own, limiting Derrick Henry to just 84 yards on 25 carries and holding the Colts to 88 rushing yards in Week 1.

The Dolphins may be 0-2, but both of their losses have been competitive and to two AFC contenders in New England and Buffalo. The clock has started on just how many games Fitzpatrick has left as the starter before he is inevitably replaced by Tua Tagovailoa, especially given the success of fellow 2020 draft-class quarterbacks Joe Burrow and Justin Herbert. Whoever the quarterback is has a weapon in tight end Mike Gesicki who ranks first among tight ends with 160 receiving yards and is tied for third with 11 receptions.

Below is everything you need to know about how to watch Thursday night’s game in Jacksonville, plus a look at the complete Week 3 NFL schedule.

What channel is Dolphins vs. Jaguars on today?

Through the first four weeks NFL Network is the exclusive TV home of “Thursday Night Football” and the only channel that will show Dolphins vs. Jaguars.

Beginning in Week 5, all “Thursday Night Football” games will broadcast live on cable network Fox in addition to NFL Network. These games will also be available for streaming on Amazon Prime at no additional charge to Prime members.

What time is the Dolphins vs. Jaguars game?

All Thursday night games throughout the 2020 NFL season will start at 8:20 p.m. ET, though the TV viewing options (more on those below) will change in a few weeks.

Dolphins and Jaguars fans should savor the moment on Thursday, as this is the lone opportunity for those fan bases to watch their teams in prime time. They join Detroit and Carolina as the only team with one primetime game. Washington is the only franchise without a primetime matchup this season.

Because Thursday night’s game in Jacksonville will be shown exclusively by NFL Network, the live stream options are limited. More will become available for “Thursday Night Football” in Week 5, when the games will start being simulcast on Fox and Amazon.

Below are all of the live streaming options for “Thursday Night Football” in 2020.

Dolphins vs. Jaguars on Thursday night kicks off a complete week of 16 NFL games, with Chiefs vs. Ravens on Monday wrapping up the Week 3 schedule with a bang.

The Fox America’s Game of the Week returns this week after not having one last weekend and will include the Dallas Cowboys and Seattle Seahawks. The Sunday night game on NBC features Green Bay traveling to New Orleans for a potential NFC Championship preview.

Below is the complete schedule for Week 3 of the 2020 NFL season.